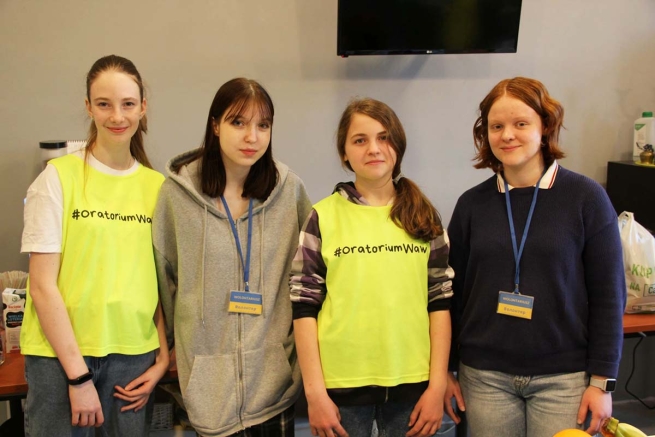 (ANS - Rome) - Among the millions of refugees fleeing Ukraine, there are mostly women with children or vulnerable elderly people. For Salesians, this situation constitutes almost a charismatic obligation to action, having been born to serve the little ones, and especially those in greatest need.

Although the Sons of Don Bosco help anyone in an emergency situation, their focus always remains on the "primary target group" - adolescents, youth, and children. Thus, in response to the emergency, a new use of traditional Salesian oratories is emerging. And this option is becoming an important feature of the Salesian reaction to the crisis.

In Poland, Slovakia, the Czech Republic, Hungary, Romania, Moldavia... Salesian oratories, which have always been open welcoming homes, are now becoming shelters for minors who have had to hastily abandon their homes and schools. Although none of them may be unaware of the war and its horrors, the Salesians give them the chance to become normal children again, not just refugees. They play, they run, they laugh, shout... And of course, they learn and pray, too. And if they need psychological counseling, they receive it through many professional volunteers and language mediators.

Some of them stay for a few days to recover from the shock of the bombings, from having to leave their homes, or from the fatigue of the journey. Others stay only long enough to move to a more permanent refuge. Still others stay longer, eager to stay close to their homeland and return home as soon as possible.

In addition to the Salesians and local volunteers, it should be noted that many young Ukrainians are also involved in activities with the children, helping their mothers to find work and opportunities to become economically independent.

Salesian entities from all over the world continue to cooperate with this vast movement of people at the service of Ukrainian minors.

The Province of St. Thomas of Canterbury of Great Britain sent a second large donation to the emergency coordination center located in Warsaw, Poland.

The Province of "Spain-Mary Help of Christians" (SMX) and the Salesian NGO "Bosco Global" have also sent two large donations collected through the special campaign #EmergenciaUcrania.

"Our effort as a Province continues to be to promote peace through education, and I believe that this reality is truly clear in the many generous gestures of solidarity that have arisen in recent weeks within each of our homes," said Fr José Luis Navarro, Provincial Delegate for Mission Animation and head of the emergency campaign.

Furthermore, the Salesian Family in Spain is also working for the direct reception of refugees: to remain with the centers of SMX, the Salesian houses of Alicante and the "San Juan Bosco" of Valencia already host Ukrainian citizens; the centers of FISAT and the "Fundación Don Bosco" of Murcia and Malaga have given their availability as part of the network of entities linked to the Government Reception System; while the foundations "Don Bosco" and "Salesians Sant Jordi" are active in the selection of families interested in hosting refugees.