Ukraine – Welcoming and supporting refugees, working with children, educating for peace: Salesians and volunteers active in every possible way 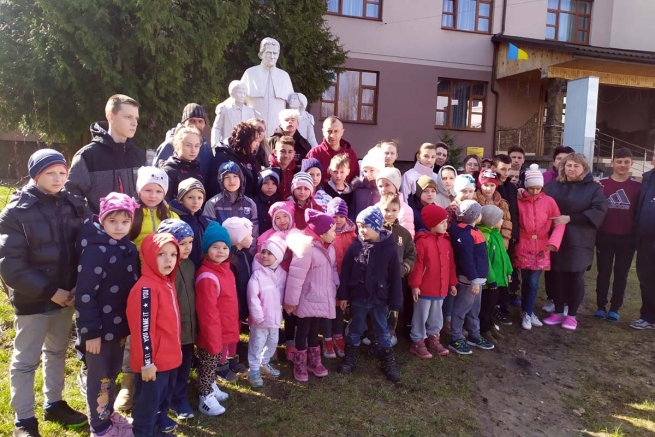 (ANS - Lviv) – Contracted faces, angry expressions, a tense and almost defiant gaze at the adult world that forced them to flee from their homes and their certainties in this way... Until a few days ago, these were the only visible expressions on the faces of many children and young people who fled with their families from the easternmost areas of Ukraine towards the western regions, less affected by the war. Now, however, at least for some of them, a few shy smiles have returned. After almost 40 days of living in the cold, 40 minors from Lysychansk are finally being welcomed into a safe environment and a family atmosphere by the Salesians in Lviv.

These 40 children and young people are part of a group of about 50 people, belonging to four large families. They traveled for over five weeks with the sole objective of leaving the bombs and massacres as far away as possible. However, the leaders of the group, like many other Ukrainians, did not want to escape abroad and last Saturday they stopped in Lviv, where they received the welcome of the Salesian community "Blessed Filippo Rinaldi".

They told the Salesians of the community about the difficulties and vicissitudes of this emergency crossing: they covered more than 1,250 km from their city, Lysychansk, in the disputed Donbas region, to get there. In these 40 days they had always to cook outdoors and, having to conserve water for drinking or preparing meals, they were never able to wash.

Helping those who are in difficulty because of the war is a mission that currently involves many Salesians and volunteers, not only in Lviv or in Ukraine.

Zuzanna and Bernadette are two students at the Salesian school in Przemyśl, a Polish city on the border with Ukraine. They are among those charged with working with Ukrainian children who have crossed the border. "We go into the groups, there where they sleep, and play with them, color books, draw together," say the girls.

In the same institute, which has become a sort of stopover point for thousands of refugees, dozens of other students and volunteers work every day, for several hours, to organize material goods and first aid supplies: it involves unloading the boxes, sorting them by gender (food, clothes, medicines...), laying them out in an orderly manner in the classrooms that have become warehouses when the materials arrive from abroad; and then repacking as needed the bags and boxes for delivery to the refugees, carrying out the reverse process of packing and loading.

Overseeing all of this at the Salesian center in Przemyśl is Salesian Deacon Dawid Wilkos, director of the local oratory, who stresses the importance of international coordination. "Countries from all over Europe are involved in supporting Ukraine: I have direct contacts with Dutch, Italians, Germans, English... They ask what we need, then I write them in detail about the needs and in the end, they deliver those very things to us." In this way, the support also reaches those families who have decided to host refugees in their own homes.

In Spain, too, Salesian solidarity is strongly focused on the needs of the Ukrainian population. In particular, the Province of Spain-Mary Help of Christians (SMX), in collaboration with the NGO "Bosco Global", has accepted the project indicated to it by the General Coordination for the Management of the Ukrainian Emergency to provide for three months, until the end of June, namely the integral sustenance of 42 refugees (women and children) hosted in the Salesian house of Swobonica, in the Province of North Poland (PLN).

In the meantime, it is still active in solidarity initiatives, in the fundraising campaign in all the works of the Province, and in the daily work of peace education. "We, as Salesian educators, must commit ourselves to build a world where peace reigns. Through our work, let us continue to educate in dialogue as the basis for conflict resolution; let us make all kinds of violence disappear from our lives. Let us build a world of peace and harmony where everyone, without distinction, has their place," concludes Fr José Luis Navarro Santotomás, Coordinator of Mission Animation of the SMX Province.