Poland – Immense work of reception, carried out with a spirit of brotherhood 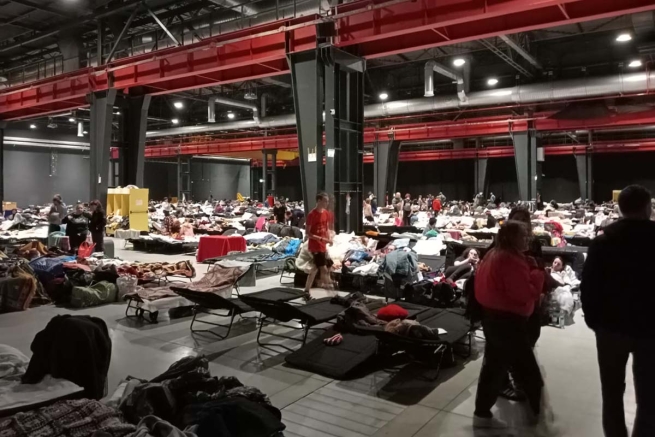 (ANS - Warsaw) - According to the most up-to-date data from the United Nations High Commissioner for Refugees, more than 4.6 million people have fled from Ukraine to neighboring countries since February 24, the date the war began. Another 6.5 million people are internally displaced within Ukraine, and an estimated 13 million people are stranded in conflict-affected areas or unable to move.

Refugees abroad are mostly women and minors because, under an emergency law of the Ukrainian government, men between the ages of 16 and 60 are prohibited from leaving the country, with a few exceptions. Moreover, as Ukrainian airspace has been closed for weeks, the only way to leave the country is by land, in the direction of neighboring countries.

According to estimates published by Openpolis, almost 60% of refugees - equal to about 2.76 million people - are hosted in Poland. The effort made by institutions, citizens, and also by the Church, and the Salesians in this country is truly significant.

The Polish Church "organizes aid shipments to Ukraine but also provides support to refugees in parishes, convents, retreat houses, and in private homes," said the Secretary-General of the Polish bishops, Msgr. Artur Miziński, presenting today the data on aid provided to "Ukrainian brothers and sisters" who fled their country because of the Russian invasion.

The prelate noted that "from February 24 to March 31, 95% of Polish parishes are committed to supporting refugees." For most of the parishes it was economic aid, 74% of the parishes provided refugees and Ukrainians who remained in their country with material aid while 45% offered shelter and beds.

The Director of Caritas Poland, Fr Marcin Iżycki, reports that the value of economic aid collected for Ukraine by the organization directed by him by the end of March exceeded 100 million zlotys (about 20 million euros).

By 31 March, 282,000 beds had been secured by various diocesan and parish Caritas groups, while more than 125,000 Ukrainian children and almost 100,000 elderly people were received. Refugees in Polish parishes can also find medical, psychological, and therapeutic support and legal and logistical help.

Many women's and men's congregations in Poland are also involved in initiatives to support refugees. From 24 February to 31 March, members of the congregations provided refugees with over 2 million hot meals and help to find employment.

The Salesians are also part of this vast effort - and, indeed, have been recognized as leaders. The latest initiative in this sense is one that sees mothers and children from Ukraine studying at school together. It happens in Oswiecim, the first and largest Salesian institution in Poland, which opened in 1898. With 1,100 students, it now houses 40 people, with women attending classes, learning the Polish language, hoping to soon be able to find a job and thus become independent.

On the one hand, this great effort of an entire people towards the citizenship of a neighboring country is entailing great sacrifices: for example, the World Exhibition Center in Warsaw, which currently hosts 3,000 people and is preparing to add another 4,000 beds, now sees a shortage of volunteers. And in fact, the Warsaw Province is studying the possibility of ensuring at least a regular minimum number of volunteers or workers.

On the other, however, the brotherhood generated between the Polish citizens who welcome and the Ukrainian refugee population is leading to small but significant gestures: there are many refugees who, to repay the hospitality they have received, are trying to make themselves useful by organizing events throughout the country, such as cleaning public parks.