Zambia – The grateful heart of Fr Á.F. Artime towards the Salesians, the Salesian Family, and young people of ZMB 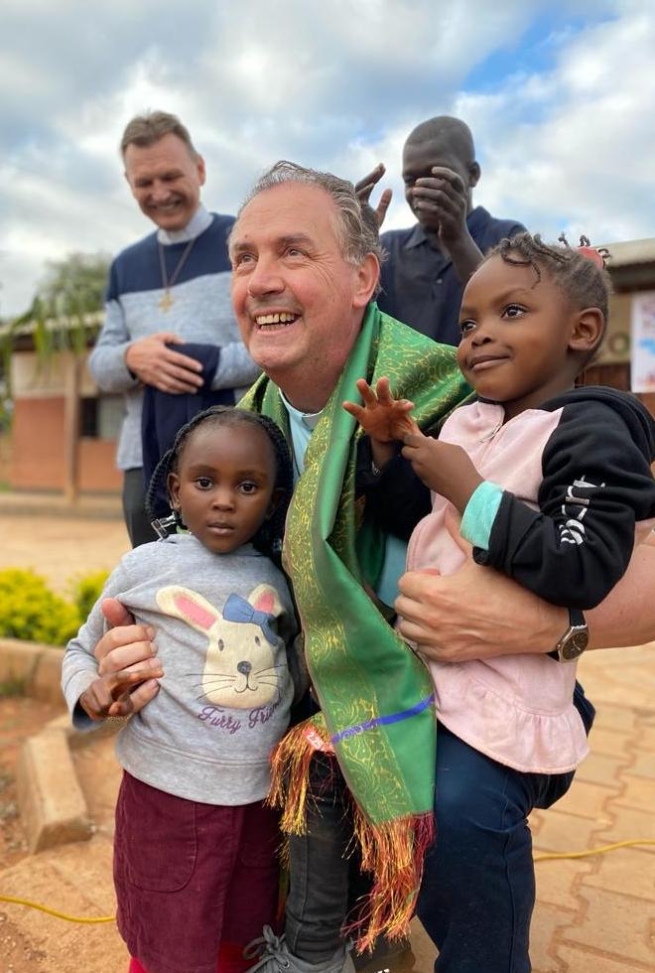 (ANS - Lusaka) - The Animation Visit of Fr Ángel Fernández Artime, Rector Major, to the "Mary Help of Christians" Vice-Province of Zambia-Malawi-Zimbabwe-Namibia (ZMB) ends today, Friday 29 April 2022. Yesterday, on the eighth day of his visit, the Rector Major had again the opportunity to be amazed and pleased by the vitality of the Salesian presence and the local Salesian Family.

The day of Thursday 28th opened for Fr Á.F. Artime with the morning Eucharist at the community of Kabwe. It was an opportunity to greet the confreres who hosted him  in recent days and to thank them for their service. At the end of the celebration, the Regional Councilor for Africa-Madagascar, Fr Alphonse Owoudou, also spoke, accompanying the greetings with a "goodbye", given that in September he will return to the country for consultations for the upcoming nomination of the next Superior and that in October the meeting of the Conference of Provinces and Vice-Provinces of Africa-Madagascar (CIVAM) is scheduled to take place in Zambia.

Afterward, the Rector Major reached the capital of Zambia, Lusaka, and visited the vast work of the Daughters of Mary Help of Christians (FMA), called "City of Hope" and active with many apostolic activities in favor of the most abandoned youth. From the moment of his arrival, the 10th Successor of Don Bosco, together with Fr Owoudou and the ZMB Superior, Fr Krzysztof Rychcik, was greeted with dances and songs of jubilation. Then, during the welcome speeches, the FMA Provincial, Sr. Cecilia Motanya, spoke about the close collaboration between Salesians and FMA in Zambia and their united efforts to spread the Gospel and the Salesian charism among the youth and the local population.

For his part, the Rector Major, in addition to thanking them for their festive welcome and apostolic witness, congratulated the religious on the 150th anniversary of the FMA Institute, visited the facilities of the work, and shared a moment of fraternity with the community of sisters.

In the afternoon, after a quick stop at the Provincial House, Fr Á.F. Artime was accompanied to the vacation camp located in Bauleni for a visit. "Father Krzysztof had told me that I could not return to Rome without seeing him," said the Rector Major as soon as he arrived. In fact, the atmosphere of great youthful joy and the typical festivity of the young people involved in Salesian activities were a great stimulus for him, who was visibly happy and "recharged" by the presence of so many young people.

Besides visiting the camp and making himself available for group photos and selfies with the young, the Rector Major congratulated the Salesian community and the animators who carry out the activities and youth spirituality with the youngest; and he was pleasantly surprised to discover at the Salesian center the presence of a chapel dedicated to Eucharistic adoration, named after Saint Matiya Mulumba, a Ugandan martyr. "This is the first time, in the 150 countries I've visited, that I've seen something like this," he said.

In the afternoon, on his return to the provincial center, he also visited the Makeni center, and then participated in an evening with the Salesian Cooperators and the Salesian Pre-Novices, during which some young people from Lilongwe, Malawi, put on a show inspired by the theme of the 2022 Strenna, "Do all through love, nothing through constraint".

In his closing words of the evening, the Rector Major expressed his satisfaction at seeing so many young people in initial formation in the Vice-Province. He then added, "My heart is full of joy for all the things you have made known to me in these days. God willing, I hope to return to visit Namibia. Now I have come to this Vice-Province for the second time, five years after the first visit, and I have seen many changes for the better. I thank you from the bottom of my heart."

This morning, before leaving Zambia, the Rector Major had time for two more important meetings: with the Apostolic Nuncio in the country, Msgr. Gianfranco Gallone, and with the Archbishop of Lusaka, Msgr. Alick Banda.