Italy – Rector Major and his Council at work, under Don Bosco’s gaze 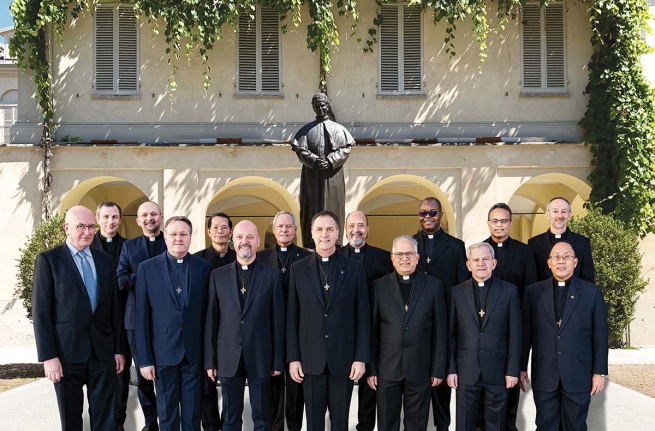 (ANS - Turin) - A traditional, yet profoundly new appointment: this is the semi-annual gathering of the Congregation's General Council, which officially began last Wednesday afternoon, June 1, 2022, and will extend until Tuesday, July 26. What makes this summer plenary session of the General Council special is that it is taking place at the Salesian Motherhouse in Valdocco, due to the ongoing renovations at the Salesian headquarters in Rome.

The current one is the first time that the gathering of the General Council elected by the 28th General Chapter is being held in Valdocco, but it shall certainly not be the last: removations at the "Sacred Heart" in Rome, which houses the Salesian headquarters, are scheduled to last about two years. But if the shift of headquarters was due to a contingent situation, it is also certain that the circumstance offers a further opportunity for spiritual nourishment and recharging at the sources of Don Bosco's Salesianity for the Rector Major, Fr Ángel Fernández Artime, and his first collaborators.

Among the principal task to complete on this occasion are the nominations of the Superiors of East Timor (TLS) and India-Panjim (INM), as well as the sharing and careful study of the numerous (13) reports on the Extraordinary Visitations conducted in the past months by the specially appointed Councilors and Visitors.

Specifically, these are the Visits conducted in the constituencies of:

Also, the different Sectors of the Congregation are presenting various specific topics for common discussion. The Sector for Formation contributes to the "internal forum" with: "The interview, personal spiritual accompaniment, and admissions: some guidelines and directives"; and, together with the Sector for Youth Ministry, spotlights the care of aspirants; while the Sector for Missions facilitates a discussion on the distribution of funds collected by the Mission Offices and the destinations of new missionaries; the General Economer's Office shall illustrate the final balance sheet or Budget for the year 2021.

Other topics of study concern, the forthcoming Joint Visits in Interamerica and South Asia; the figure of Regional Delegates in their relations with Sectors and Provincials; the reorganization of formation houses in Europe; and the redesigning of Salesian presences in the Balkan area and other parts of Eastern Europe.

Finally, several other important events are also scheduled during the Council's work sessions:

- June 23: Joint Fraternal Meeting with the General Council of the Daughters of Mary Help of Christians (FMA);

- June 24: Thanksgiving Feast dedicated to the Rector Major, on the occasion of Don Bosco's saint’s day (Nativity of St. John the Baptist);

- June 26 to July 2: Spiritual Exercises in Annecy (France), in the footsteps of St. Francis de Sales, led by Salesian Fr. Morand Wirth, an excellent connoisseur and popularizer of the Congregation's patron saint, this being the 400th anniversary of his death.