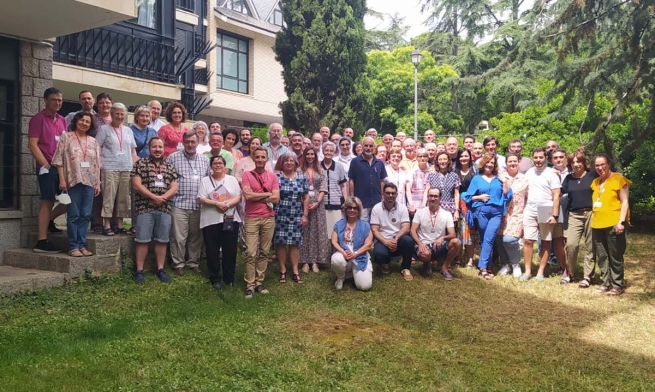 (ANS - San Lorenzo de El Escorial) - From June 10-12, 2022, the 5th Regional Congress of Salesian Cooperators (SSCC) of the Iberian Region, formed by the 7 Provinces of Salesian Cooperators in Portugal and Spain, was held in El Escorial. Held under the motto "It is near," the Congress had a dual purpose, programmatic and elective. On the one hand, it served to analyze the steps taken in the last six years, outlining new objectives and lines of action for the next six years; on the other, it made it possible to elect the new World Councilor for the Region, as well as the new members of the Regional Executive Secretariat (SER).

Together with the Congress General Secretary and outgoing World Councilor, Raúl Fernández, 71 people attended the Congress, including SSCCs and Provincial Delegates (members of Provincial Councils, SER, and candidates). The participants were also accompanied by the World Coordinator of the Association of SSCCs, Antonio Boccia, the Rector Major's Delegate for the Secretariat for the Salesian Family, Fr. Joan Lluis Playá, SDB, the Salesian World Delegate for SSCCs, and Past Pupils, Br. Domenico Nguyen (SDB), and World Delegate for SSCCs of the Daughters of Mary Help of Christians, Sr. Lucrecia Uribe (FMA).

Alternating with moments of conviviality, the congress was divided into five main sessions:

- The report on the state of the Association in the Region by World Councilor, Raul Fernandez.

- The general talk, delivered digitally, by Cardinal Cristóbal López, SDB, Archbishop of Rabat, on "Building the Kingdom of God in view of New Situations of Poverty," in which the cardinal illustrated with a simple decalogue some ways in which to "become poor" to build the Kingdom of God.

- Some contributions from the World Coordinator and World Delegates on the theme of synodality, starting from the biblical perspective and continuing on how to interpret and live it in the Association.

- Group work and sharing, to establish the programmatic lines on which the project for the next six years will be based.

- The Election and thanksgiving.

Thus, at the end of the last item in the agenda of the work, as SER members, the following were elected:

- as World Councilor for the Iberian Region: Borja Pérez

- at the Secretariat: Monica Domingo

- at Salesian Solidarity and Cooperation for the Youth of the World: Br. José Luis Muñoz

- as Spokesperson for Portugal: Valter Silva

After expressing thanks to the SER members who finished their term and words of thanks from the outgoing Councilor, the Congress concluded with the greeting of the new World Councilor, Borja Pérez, who encouraged everyone, in the context of the Feast of the Trinity and a few days before Pentecost, to be attentive to the Holy Spirit, to be able to identify the challenges that await the association and to be able to give them ambitious and effective responses, in the response to emergencies, but above all in strategic planning, putting each one's personal gifts and talents at the service of the Association and especially in the building of the Kingdom of God.

Finally, Fr. Playá concluded the activities by presiding over the Eucharist and giving thanks for the successful outcome of the Congress, the result of a collaborative effort in the spirit of the Salesian Family.