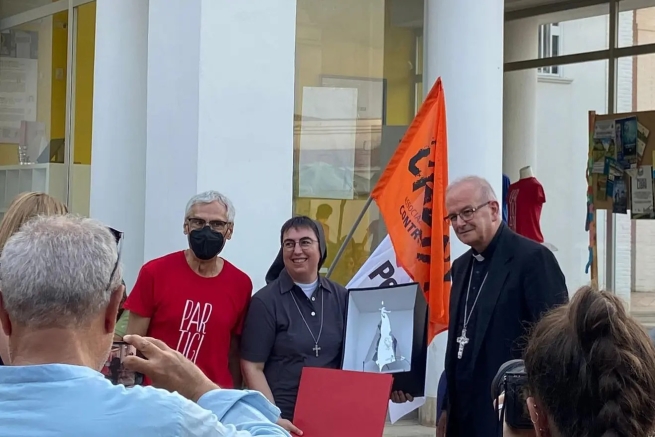 (ANS – Casal di Principe) – Sr. Alessandra Smerilli, Daughter of Mary Help of Christians, Secretary of the Dicastery for Integral Human Development, Economist, and Full Professor of Political Economy at the Pontifical Faculty of Educational Sciences “Auxilium” of Rome, has been awarded the Don Peppe Diana National Award – For the love of my people.

The National Prize is awarded to personalities who have been able to best embody in the artistic, social, religious, political, economic, and professional fields, the message of Fr. Giuseppe Diana, priest of Casal di Principe killed by the Camorra on 19 March 1994, by contributing to denunciation, to resistance, and to the construction of free communities that are alternatives to the mafias.

The bestowal ceremony took place on 4 July 2022, in Casal di Principe (in the province of Caserta), at “Casa Don Diana”, well freed from the Camorra, on the occasion of Don Diana Day, on the day the priest would have celebrated his birthday, and the inauguration of the 15th edition of the Civil Commitment Festival, realized on assets confiscated from organized crime.

The motivation for assigning the recognition to Sr. Alessandra Smerilli is based on her work “to defend equality and for the integral promotion of the person by developing those principles of the social doctrine of the Church to which Pope Francis constantly reminds us for building a better world.”

Together with her, Isaia Sales, writer and academic; and actor Alessandro Gassman were also awarded. For the Special Mentions section, the award went to Pasquale Leone, Scout and President of Aps TerradiConfine di Ponticelli; to Professor Daniele Manni; to Massimo Antonelli, Coach of Tam Tam Basket; to Cartoonist Takoua Ben Mohamed. A Special Prize was awarded to the Journalist Angela Caponnetto, a chronicler of migratory flows and of refugees from conflict zones.

“Thanking for this recognition, I dedicate the award to all those who work every day in the field, not hesitating to put their lives in danger for truth, justice, legality” commented Sister Alessandra on receiving the Award.