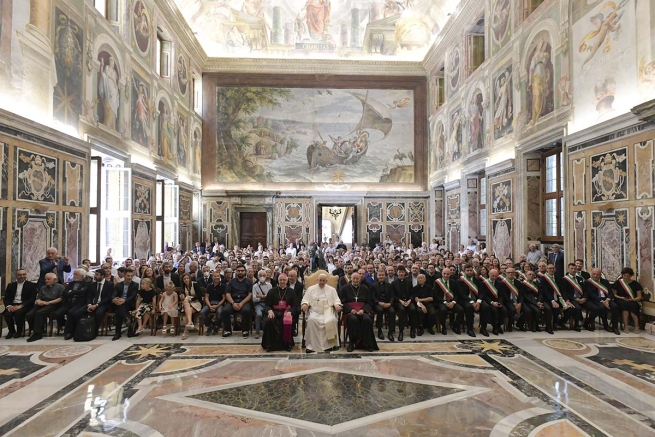 (ANS - Vatican City) – Pope Francis while receiving the representatives of the ecclesial and civil community of Lodi during an audience in the Clementine Hall, on August 26, 2022, shared the reasons for his closeness to that territory and its people: his baptism received from the Salesian priest Fr. Enrico Pozzoli, a priest originally from Lodi, Italy.

The Audience with Pope Francis was attended by Priests, Sisters, Seminarians and lay faithful, Synodal delegates and representatives of parishes and associations, together with their Bishop Emeritus, Volunteers and Communication workers, led by Bishop Rt. Rev. Maurizio Malvestiti, who presented a greeting to the Pope on behalf of the whole diocese.

During the Audience, the Holy Father recalled the "baptismal" bond with Lodi, affirming his "kinship" with this city, and then recounted his personal experience.

"As you know, Fr. Enrico Pozzoli, not only baptized me but also helped me to enter the Society of Jesus (Jesuits) and followed me up all my life. He is a son of your land, a native of Seine Lodigiana, in the valley area, near the river Po“-explained Pope Francis. “Attracted by the charism of Don Bosco, he left as a young man for Turin and became a Salesian. Fr. Enrico was immediately sent to Argentina, where he remained throughout his life. He became friends with my parents and helped them accept my call to the priesthood. I was pleased when a good fellow countryman of yours, who is present here, collected documents and news about him and wrote his biography. I had them immediately of course! But today, I receive it ‘officially’, and with emotions, because you, friends of Senna Lodigiana, the neighbours of Fr. Pozzoli bring it to me. He was a true Salesian! A wise, good, hard-working man; an apostle of the confessional, who was never tired of confessing; he was always merciful, capable of listening and giving good advice. Thank you very much! That is why I say that we are relatives, not by blood relations -but the thread that unites us is much stronger and more sacred -because it is that of Baptism", added the Holy Father.

During his speech, he did not fail to recall the closeness of the Church to migrants and the pandemic. Pope Francis also focused on another important aspect, that of evangelization. Recalling Fr. Pozzoli, the Holy Father affirmed that "evangelization is done essentially with holiness of life, witnessing to love in fact and in truth" and that, in the face of a changing world, "there is a need to seek newer paths, newer methods, newer languages, but retaining the path of Lord - he observes. That which remains the same is a witnessing life shaped by the Gospel".

The Pope then concluded by exhorting the Lodi community "to continue the journey, faithful to the roots and open to the world, with the wisdom and patience of the peasants and the creativity of the artisans; committed to the care of the poor and to the care of the land that God has entrusted to us".