Argentina – Mr. Zatti, nurse. A charitable answer to accompany those who suffer
Featured 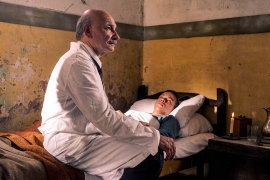 (ANS - Buenos Aires) - Artemide Zatti's professional profile, which began with a promise, was rooted in his trust in Providence and developed once he recovered from illness. The phrase "I believed, I promised, I was healed," the motto of his canonization, shows the total dedication Zatti had for his sick brothers and sisters, the poorest and neediest.

He carried out this commitment daily until his death in the San Jose Hospital, founded by the first Salesians to arrive in Patagonia, and he reiterated it during each and every home visit, urgent or otherwise, that he made to the sick who needed him.

On his bicycle, in his administrator's office, in the operating room, in the courtyard during recreation with his poor "relatives," in the hospital wards he visited every day, he was always a nurse; a holy nurse dedicated to healing and relieving, bringing the best medicine: the cheerful and optimistic presence of empathy.

A person and a team that do good

It was faith that drove Artemide Zatti to tireless but reasoned activity. His religious consecration had introduced him directly and completely into the care of the poor, the sick, and those in need of health and God's merciful consolation.

Mr. Zatti worked in the world of health care alongside doctors, nurses, health care personnel, Daughters of Mary Help of Christians, and the many people who collaborated with him in supporting the San José Hospital, the first in Argentine Patagonia, in Viedma in the first half of the 20th century.

The tuberculosis he contracted at the age of 20 was not an obstacle to persevering in his professional choice. He found in the figure of the Salesian coadjutor brother the style of commitment to work directly with the poor. His religious consecration, lived out in his profession as a nurse, was the combination of his life dedicated to God and his brothers and sisters. Naturally, this manifested itself in a peculiar, unique, and unrepeatable personality. Artemide Zatti was a good person who worked directly with the poor, doing good.

"Relative of all the poor"

Direct contact with the poor was aimed at health, that is, to soothe pain, to bear suffering, to accompany the last moments of their lives, to offer a smile in the face of the irreversible, to lend a hand with hope. For this reason, Zatti became a "presence-medicine": he healed directly with his pleasant presence.

His main biographer, Salesian Raul Entraigas, made an original discovery. He identified in the phrase of a countryman the synthesis of Artemis Zatti's life: he seems to be "the relative of all the poor." Zatti sees Jesus Himself in the orphans, the sick, and the natives. And he treated them with such closeness, appreciation, and love that they all seemed to be his family members.

With his bicycle, the preferred means of transportation for these tasks, he rode around and through the streets of Viedma. A beautiful response written in a letter to his niece Maria Elisa Zatti, Daughter of Mary Help of Christians, expresses the following:

"Thank God I am in good health, and I have been given the opportunity to go about the city with syringes, thermometer, songs, etc. I hope you are also in good health but don't go around like your uncle."

Seeing the needs of the village, Zatti perfected his profession. Gradually he became in charge of the hospital, studied and validated his knowledge with the State when asked. Doctors who worked with Artemis, such as Drs. Molinari and Sussini, testify that Zatti possessed a great deal of medical knowledge, the result not only of his experience but also of his studies.

Fr.  De Roia adds, "As far as his cultural and professional training is concerned, I remember seeing books and publications on Medicine and, asking him once when he read them; he told me he did so in the evening or during the afternoon rest of the patients, once he had finished all his duties at the Hospital."

There is in this regard a document, "Professional Credentials," issued by the Secretariat of Public Health of Argentina complete with a professional nursing matriculation number 07253. These were the studies he had done at the National University of La Plata in 1948, at the age of 67. Added to this was an earlier certification, in 1917, as a "graduate" in Pharmacy studies.

His way of life led him to a commitment in which he met directly with the poor, the sick, and the needy. That is why the nursing profession had an added value: his presence was a witness of God's goodness. This simple way of looking at reality may help to better understand Zatti's life, paying special attention to the term "directly."

In this perspective we find what is most genuine about Zatti, highlighting what is called "religious life" or "consecration." This is why Artemis is a holy Salesian. He is a holy nurse. This is the legacy he left to everyone. And this is the challenge he throws to everyone and invites them to take up.