Vatican – Migrant, relative of all the poor, Salesian coadjutor and intercessor for vocations: Pope Francis sketches the figure of Artemide Zatti 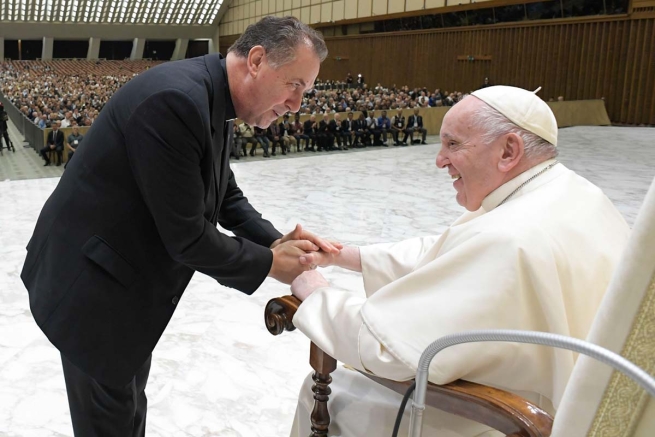 (ANS - Vatican City) - A detailed, precise, timely, and personal knowledge: this is what Pope Francis showed he had regarding the now upcoming saint Artemide Zatti. Speaking at the ceremony scheduled in Paul VI Hall on the eve of the canonization, he offered the faithful and pilgrims an accurate profile of Zatti as a migrant, a relative of all the poor, a Salesian coadjutor and an intercessor for vocations.

Welcomed by the general enthusiasm of all the faithful present at the event, while the choir directed by Fr. Francesco de Ruvo, SDB, sang the famous Salesian song Giù da' Colli, the Holy Father then received the greeting of the Rector Major, Fr. Ángel Fernández Artime, who thanked him for granting this special audience to the pilgrims and devotees of Zatti.

Afterward, the Pontiff began his address and started from the figure of Zatti as a migrant. While in the context of 19th-century migrations many migrants lost with their roots their faith as well, the Zatti instead remained faithful. "Participation in the life of the Christian community, cordial relations with the priests, common prayer at home, and attendance at the sacraments did not fail. Artemide grew up in an excellent Christian environment." That is why, after meeting them in Bahía Blanca, Zatti later matured the decision to become a Salesian.

Describing Zatti in light of the nickname he was given early in life, "relative of all the poor," Pope Francis then recalled his tireless zeal for all the sick, the fruit of that promise he made in his youth after he was himself cured of tuberculosis. "In that sliver of Patagonian land, where the life of our Blessed flows," the Pontiff commented in words of great delicacy, "a page of the Gospel was rewritten: the Good Samaritan found in him heart, hands and passion, first and foremost for the little ones, the poor, the sinners, the last. He continued further, "Thus a hospital became the 'Father's Inn,' a sign of a Church that wants to be rich in gifts of humanity and Grace, a dwelling place of the commandment of love of God and brother, a place of health as a pledge of salvation."

It was precisely his unity with God that enabled him to act as he did for the needy: "His intense work and tireless availability for the needs of the poor were animated by a profound union with the Lord: constant prayer, prolonged Eucharistic adoration, praying the rosary. Artemide was a man of communion, who knew how to work with others: nuns, doctors, nurses; and by his example and counsel he formed people, shaped consciences, converted hearts."

Zatti as coadjutor was the third aspect highlighted by Francis. He cited Zatti's words that shape the canonization motto – I believed, I promised, I was healed - and the episode in which Zatti himself uttered them. For Zatti, such words expressed a program of life, a life that, as the Pope noted, once "regained is no longer his property, but is all for the poor," and he lived this mission in communion with his Salesian confreres: "he is the first to be present at community moments, with his joy and sympathy he animates the fraternity."

Lastly, Pope Francis, who as Provincial Superior of the Jesuits of Argentina promoted novenas and prayers for new vocations of consecrated brothers through Artemide Zatti, underlined Zatti's role as intercessor, reporting his direct testimony.

And finally concluding, the Pope reiterated the testimonial and operational value of the consecration of coadjutors, a vocation chosen with full awareness and lived to the full by the future saint. "The brothers have a special charism that is nourished in prayer and work. And they are good for the whole body of the congregation. They are people of piety, they are cheerful, hardworking. One does not see 'inferiority complexes' in them for not being priests, and they do not aspire to become deacons. They are aware of their vocation and they want it that way," the Pope said clearly, before imparting the apostolic blessing to all and leaving the Paul VI Hall accompanied by the jubilant greeting of all the faithful.