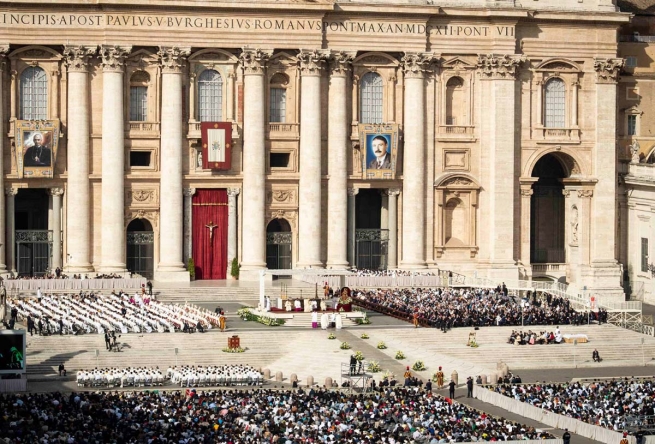 (ANS - Vatican City) - "Salesian Brother Artemide Zatti was a living example of gratitude." With these words, pronounced during the homily of today's Mass, Oct. 9, 2022, Pope Francis points all the faithful to the model of the "holy nurse" and "relative of all the poor," on the day he proclaims his sanctity before the universal Church. It is just past 10:00 a.m. (UTC+2) when the Eucharistic Celebration with the Rite of Canonization of Salesian Brother Artemide Zatti and Msgr. Giovanni Battista Scalabrini, bishop and Founder of the Congregation of the Missionaries of St. Charles and the Congregation of the Missionary Sisters of St. Charles Borromeo, begins on the parvis of St. Peter's Square in Rome.

Solemn as the occasion deserves the whole celebration, beginning precisely with the rite of canonization, placed at the beginning of the liturgy. After the entrance hymn, the Schola of St. Peter's Basilica intoned the hymn Veni, Creator Spiritus, and Cardinal Marcello Semeraro, Prefect of the Dicastery for the Causes of Saints, accompanied by the Postulators, Father Graziano Battistella, CS, and Father Pierluigi Cameroni, SDB, went to the Holy Father to present the Petitio, the request with which they ask to proceed to the Canonization of the two Blesseds.

The figures of Msgr. Scalabrini and Br. Zatti are thus briefly illustrated through the reading by Card. Semeraro, of their respective biographies.

Afterward, the entire square packed with the faithful invokes, through the Litany of the Saints, the participation of the entire heavenly Church to accompany the inscription in the Roll of Saints of the two Blesseds.

It is 10:30 a.m. when the Holy Father Francis pronounces in Latin the solemn formula of canonization by which he declares and defines Giovanni Battista Scalabrini and Artemide Zatti as saints.

Great applause from the assembly of the faithful accompanies the proclamation, followed by the incensation and deposition at the feet of the statue of Our Lady of the distinguished reliquaries of the two new saints, and by the thanksgiving of the Cardinal Prefect of the Dicastery for the Causes of Saints, who at the same time asks and obtains from the Pontiff the consent to the drafting of the Apostolic Letter about the canonization having taken place.

The Sunday Eucharistic liturgy then resumed, concelebrated by several Cardinals, Archbishops, Bishops, and priests, many of them Sons of Don Bosco, led by the Rector Major, Fr. Ángel Fernández Artime. At the time of the homily, the Pope elaborated on the Readings of the XXVIII Sunday of Ordinary Time. Two aspects emphasized in particular by the Pontiff: walking together and gratitude.

Walking together is the characteristic of the ten lepers healed by Jesus. "This image is also meaningful for us," the Pontiff says. "When we are honest with ourselves, we realize that we are all sick at heart, all sinners in need of the Father's mercy. Then we stop creating divisions on the basis of merit, social position, or some other superficial criterion."

"Brothers and sisters, let us reflect and see if in our lives, in our families, in the places where we daily work and spend our time, we are capable of walking together with others, listening to them, resisting the temptation to lock ourselves up in self-absorption and to think only of our own needs," is the invitation the Pope elicits.

This is also an opportunity to once again denounce the exclusion of migrants, which the Pope flatly calls "scandalous, criminal, disgusting and sinful."

"Today let us think of our migrants, those who die," the Pope adds again, leaving the question open to all, "And those who manage to enter, do we receive them as brothers or do we exploit them?

Next, the Holy Father highlights the value of gratitude, following the model of the Samaritan, the only one of the ten healed lepers who returns to thank Jesus: "This is a great lesson also for us, who daily benefit from the gifts of God, yet often go our own way, failing to cultivate a living relationship with Him. (...). And, thus, we end up thinking that all the gifts we receive each day are natural and due to us."

On the contrary, the Pontiff notes that "gratitude, the ability to give thanks, makes us appreciate instead the presence in our lives of the God who is love. And to recognize the importance of others, overcoming the dissatisfaction and indifference that disfigure our hearts."

Knowing how to walk together with others and being able to give thanks, the Pope says, are precisely what marked the lives of the two saints ordained today. The Pope quotes Bishop Scalabrini, who founded a Congregation for the care of emigrants; the Pope offers a quote to affirm that “in the shared journeying of emigrants we should see not only problems, but also a providential plan. In his words: “Precisely because of the migrations imposed by persecutions, the Church pressed beyond the confines of Jerusalem and of Israel, and became ‘catholic’; thanks to the migrations of our own days, the Church will be an instrument of peace and of communion among peoples” (L’emigrazione degli operai italiani, Ferrara, 1899).

The Pontiff then reflects on the forced migration of which the Ukrainian population is a victim: "Let us not forget today martyred Ukraine."

On Salesian Brother Artemide Zatti, he then reiterates, "For his part, Salesian Brother Artemide Zatti, with his bicycle, was a living example of gratitude: cured of tuberculosis, he devoted his entire life to serving others, caring for the infirm with tender love. He was said to have carried on his shoulders the dead body of one of his patients. Filled with gratitude for all that he had received, he wanted to say his own 'thank you' by taking upon himself the wounds of others."

The Holy Father's homily concluded, therefore, with a final exhortation, “Let us pray that these holy brothers of ours will help us to walk together, without walls of division; and to cultivate this nobility of spirit so pleasing to God, which is gratitude."