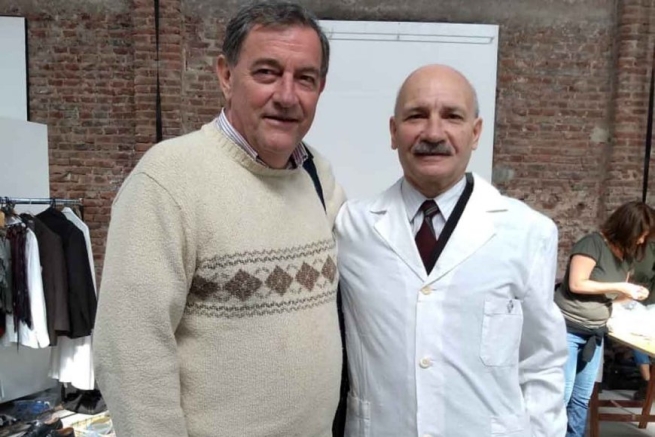 My fraternal greetings to all of you and the joy of being able to share, in the family, a very profound experience that God, in His goodness, gifted me through the intercession of the holy nurse from Patagonia, Br. ZATTI, also rightly called "the relative of all the poor."

First, I would like to clarify: with pleasure I bear this testimony, but I always remember that the key figure in everything is Br. Zatti, who knew how to give his life for the sick. It is important not to stop at what is sensational or extraordinary in the case, but that all this animates us to live our Salesian life with the generosity and joy with which this coadjutor brother lived it.

My illness began in March 1980 in Bahía Blanca. (Argentina). I was 24 years old and was to begin my first year of Theology. With confreres from the community of theologians, we went from Buenos Aires to Bahía Blanca and Fortín Mercedes to spend a few days there. There I got sick. I was diagnosed with appendicitis. I was operated on. Three days later there was gangrene with gas in the affected area. New operation. I was in intensive care for two days.

After 15 days, as my condition was critical; they transferred me to Muñiz Hospital in Buenos Aires, which specializes in infectious diseases. New surgery to control the gangrene. The infection had localized in the lungs. Twice they drained me. The fever, a sign of infection, did not subside.

Subsequent tests diagnosed septicemia. It meant that the infection had not remained restricted to one organ, but had entered the bloodstream. Since the tests indicated that I had no defenses in my body (zero degrees of immunity), the picture of the situation worsened. The lack of immunity was provoked by the very strong antibiotics they were administering to me and the weakness of the organism. Throughout this period, I was being fed by intravenous infusion.

In the opinion of Dr. Zabalza, head of the 5th surgery room at Muñiz Hospital, septicemia plus zero degrees of immunity meant a 100% mortality rate.

In Muñiz I had two critical moments. The first was on April 5: I recovered partially. The doctors repeated to my parents that the case was extremely difficult and there was no hope for life. The second was on April 18: after spending the night in a coma, I woke up in the morning, talked a little, then asked to eat, and to the amazement of doctors and nurses, the fever was gone. From then on, recovery was very rapid and total.

Four days later they authorized me to go to a Salesian work near the hospital to continue my convalescence there. Every other day I had to report to the hospital for medication.

At the end of May, I was able to go home to my parents to complete my convalescence. In October I played football with the students of the Salesian agricultural school that functions in the town where my family lives. Dr. Zabalza used to call me "the dead man who speaks"… and, as you can see, Zatti healed me very well.

It is interesting to add that it was precisely in March 1980 that the diocesan process for Br. Zatti's cause was opened in Viedma.

Why is my healing attributed to Br. Zatti? Because, when I went to study Theology in a community in Bahía Blanca, the two formators I had, rector Fr. Juan REBOK and assistant Fr. Emilio BARASICH (who knew Zatti personally), started novenas (there were three) and invited other communities and acquaintances to pray to ask for grace through Zatti's intercession.

I would like to thank my family, especially my mother Olinda. She accompanied me throughout that time, enduring such anguish with fortitude.  And so many brethren who took care of me with affection.

Every human life is a miracle. We are not always aware of it. We stop at the surface and do not perceive the value and grace represented by the fact of "being alive." Certainly, the experience of a healing that eludes medical predictions accentuates in me the certainty of "being alive by a miracle," by the sheer goodness of God.

This experience of pain, of illness, fundamentally helped me to look at life with other eyes. God has touched my existence in a very strong way. This “extreme” experience helps me to put things in the right place. It helps me to “relativize”, put many problems into perspective... When I have difficulties or lose my composure a bit, I just have to mentally transfer myself to Muñiz Hospital and everything calms down, clears up...

The grace of being alive makes many things stop upsetting and disturbing a person.  And it invites us to live in constant thanksgiving to God for His love and tenderness.

I first came into contact with Zatti's life in the novitiate, the year 1973, by reading Fr. Entraigas' book "The Relative of All the Poor," the first biography on the confrere. I really liked to see that being a saint does not consist in being perfect or doing extraordinary things, but in living in an attitude of service and availability to the brothers, especially the neediest.

I was impressed by his simplicity and daily giving. His serene temperament and amiable trait, combined with a sense of humor. He lived intensely the Salesian spirituality of "study to be loved." And he also lived the essence of the Gospel: to be a person capable of loving, donating his life in everyday things. This is a value that greatly impresses young people, who naturally have strong feelings and desires for solidarity and giving in their hearts.

I conclude: may Zatti intercede with God and with Don Bosco so that numerous and holy coadjutor brothers may arise in our Congregation.