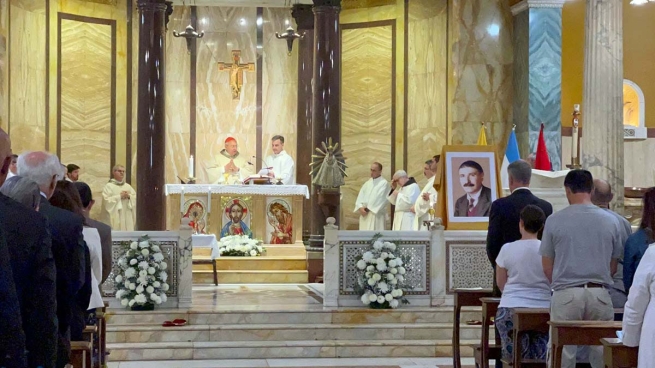 (ANS - Rome) - The canonization of Artemide Zatti was an event that filled all of Argentina with joy and pride, the country where the Salesian coadjutor spent his entire life of dedication to the sick and the poorest. Although born in Italy, he lived in Argentina from the age of 17 until his death, and has thus been called the third Argentine saint, after St. Héctor Valdivielso Sáez, and St. José Gabriel del Rosario, better known in his homeland as the cura brochero. That is why today, Monday, Oct. 10, at the Argentine National Church in Rome, Argentine Cardinal Leonardo Sandri, Prefect of the Dicastery for the Eastern Churches, presided over a Mass of thanksgiving for Zatti's canonization for the Argentine faithful gathered in Rome.

The Mass was also concelebrated by the Rector Major, Fr Ángel Fernández Artime; the Postulator General of the Causes of Saints of the Salesian Family, Fr Pierluigi Cameroni; Fr Gabriel Romero, Councilor for the America South Cone Region; Fr Manuel Cayo, Provincial of Peru; Fr Ricardo Campoli, of the Social Communications Department; the Rector of the National Church of Argentina in Rome, Fr Fabián Alesso; and other priests, Salesians and non-Salesians.

During Mass, the Argentine cardinal emphasized the value of today's celebration, "a propitious occasion to present to the Lord the gratitude on behalf of our Argentine homeland, Italy and the Salesian Congregation, since this brother of ours, Artemide Zatti, was elevated to the honors of the altars yesterday by Pope Francis. Artemide Zatti is a saint!"

Thinking of the faithful present in the church, he also stated, "we feel him close because his story, at least at the beginning, is similar to that of many of us, as it is also for Pope Francis' family and mine."

Then, going into detail about the celebration of the Mass with the Rite of Canonization yesterday, he noted some "admirable coincidences that the Lord places in our path," such as the circumstance that Zatti, who immigrated with his family to Argentina, was canonized together with the apostle of migrants, St. Giovanni Battista Scalabrini.

He also drew a parallel between the figure of the leprous, healed and grateful Samaritan presented by the Gospel of the XXVIII Sunday of Ordinary Time and that of Artemide Zatti: "Pope Francis spoke of Zatti as a living example saint of gratitude, that virtue manifested by the healed Samaritan. Our new saint, once he was cured of tuberculosis contracted from caring for a Salesian who was suffering from it, vowed to Mary Help of Christians that if he survived, he would consecrate his life to the sick, and he kept his promise until the last day of his existence (...) Before being a healer, Zatti recognized himself as a healed person."

Still on the subject of Zatti, the cardinal recalled that "the reason for his existence was charity," that his goal was "to be a recipient of the care of God, Father of all, and to come to be a sign of His light," with a testimony "that was capable of disarming even the most unbelieving." That is why he summarized his action as "heroic in daily life, of a genuine and contagious goodness, without selfish interests and hence fruitful."

"If we had to choose a symbolic image of Zatti," he added further, "I think the most faithful would be that of Zatti with his bicycle, the vehicle with which he went to his needy, poor and rich, with his medicine bag in one hand, and with the rosary in the other: on the one hand, human science with its discoveries to eradicate diseases, and on the other, the plea of a son to his Father to obtain every grace. It is here the synthesis of a man, of a religious, of a saint."

And after quoting Salesian Msgr. Esteban Laxague, bishop of Viedma - the Argentine city where Zatti expressed his decades of service - to recall how the figure of Zatti is still alive and present today, Card. Sandri invoked the intercession of the new saint for all of Argentina, the Salesian Congregation, and especially its coadjutors, its brothers, for healthcare personnel, the Pope and the whole Church. "May his intercession inspire us in the fulfillment of the daily mission that is required of us," he concluded.

At the conclusion of the Mass, Fr. Campoli presented the authorities present with several gifts on behalf of the Rector Major; among them, Zatti's biography "Artemide Zatti, Salesiano Coadiutore. In bicicletta verso il cielo," edited by Fr. Cameroni; a relic ex indumentis; and the book "Don Bosco a Roma," which offers a guide to the Saint of Youth’s places in the Eternal City.