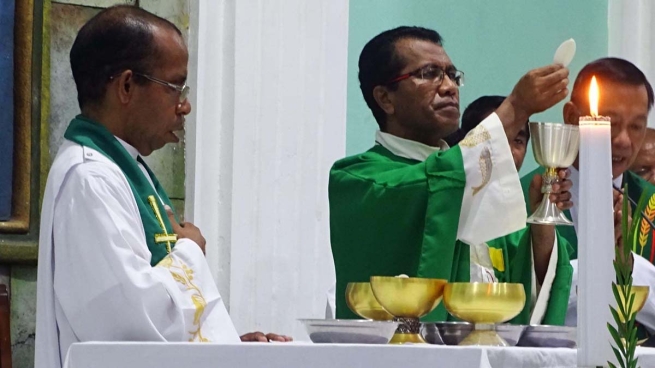 (ANS – Dili) – It is with great joy and enthusiasm that the Salesian congregation in the whole world celebrated the canonization of the blessed Artemide Zatti to the stage of Sainthood. The same, here in TLS Vice-Province; each Salesian Community and the parishes under the Salesian tutelage celebrate this historical and sacred celebration with joy and enthusiasm.

The Eucharistic Celebrations were using the Sunday Eucharistic Liturgy since the celebration falls on Sunday. During the homily, the three homilists in their respective celebrations emphasized their reflection on the readings of the XXVIII Sunday Ordinary time and the life and virtues of this new Saint.

In Dili, Fr. Manuel Pinto SDB elaborated his homily under the title of “St. Artemide Zatti: A grace of God for the Church and the Salesian Family.” He stated his homily by presenting a summary of Rector Major’s message on this gift the congregation received through the canonization of Blessed Zatti. The message was full of sincere love and affection to all the Salesian family around the world.

As far as the readings and the life of St. Zatti are concerned, the Vice-Provincial summarized his homily into: “THE GRACE OF GOD, THE LOVE OF GOD, AND GOD'S UNIVERSAL PLAN OF SALVATION". Furthermore, he said, "God has shown his goodness not only by words but through concrete examples. These concrete examples are General Naaman, the 10 lepers, and St. Artemide Zatti.”

The episode on general Naaman reveals to us that only God/YHWH offers LIFE and SALVATION, without limit and excluding anyone. Our response is to RECOGNIZE the grace of God, WELCOME (receive and accept) God as the only Saviour, and manifest to Him our GRATITUDE. Regarding the date of the canonization of St. Zatti, he did not find any motives but perhaps according to him because the readings on the 28th Sunday year C of Ordinary Time are talking about GRATITUDE. Aside from that, there is also a common idea on HEALTH. The sick Naaman got healed through the grace of God. The 10 lepers, after all, got healed through the intervention of Jesus; St. Artemide Zatti, who was infected with  TBC and with the doctors surrendered, was healed through faith and unending prayer to God through the intercession of the Blessed Virgin Mary Help of Christians.

He concluded his homily with the message from the Rector Major to the worldwide Salesian Family: “in this year that we celebrate the feast of a giant Saint, the 400 anniversary of his death that teaches us sanctity through simplicity, then followed by Don Bosco that gave all his time and his life for his boys, the same also with Artemide Zatti that lives in sanctity in a particular manner in his daily work with dedication, with simplicity and with sympathy to the family, to the young people and most especially to the sick. Together with the universal Church, with the Salesian Family in the world let's raise our hearts to the Lord and thank God for this special Grace,” he added.

After the Mass, everyone was invited for refreshments in the parish hall prepared by the Salesian Family in Dili. After the snacks, the TLS Social Communication team presented a video dedicated to St. Zatti in the Tetum version and a song on Zatti’s life produced by the Post-Novitiate community. Then there were dance presentations from the Oratorians of Don Bosco Comoro, Dili.