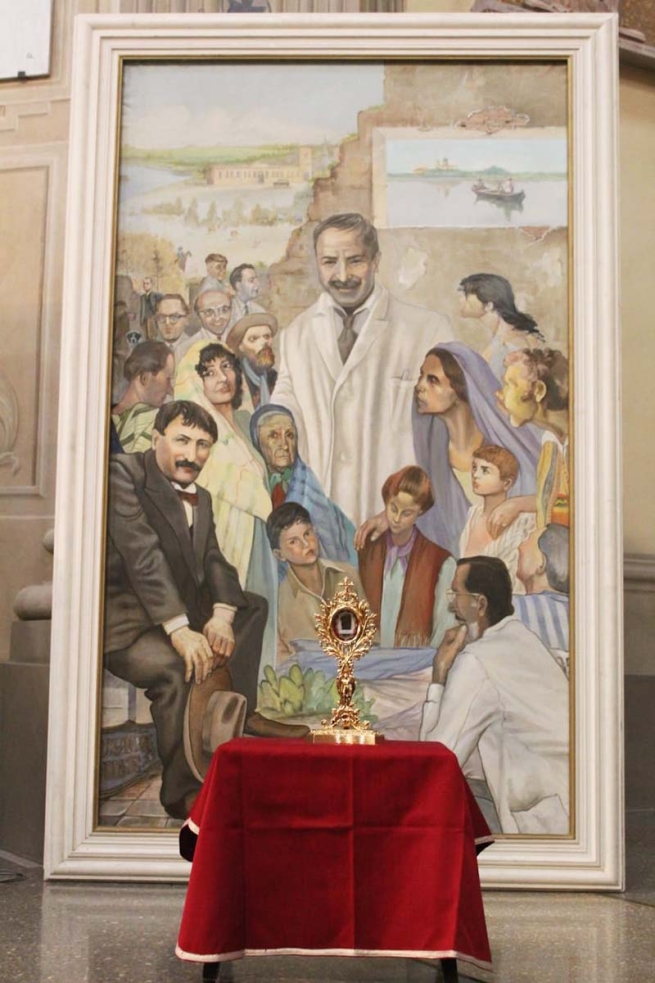 (ANS - Boretto) - On Sunday, October 16, 2022, the city of Boretto experienced a historic day celebrating thanksgiving for the canonization of fellow citizen Artemide Zatti.

In the morning in the Basilica dedicated to St. Mark an entire community, led by parish priest Fr. Giancarlo Minotta, with the presence of Fr. Leoni Erino, Vicar of the Lombardo-Emilian Province (ILE) and several Salesians, experienced the Eucharist in honor of the new saint. Fr. Pierluigi Cameroni, Postulator General for the Causes of the Saints of the Salesian Family, presided over the solemn celebration. In his homily, he highlighted how Artemide Zatti was, in the style of the Good Samaritan, a man of welcome and compassion, who grew up in a family marked by deep bonds of affection and faith.

A relic of the new saint was solemnly carried in procession as a sign of his living presence as an intercessor and on the road companion. The mayor, Dr. Matteo Benassi, expressed the joy of the entire civic community by sharing Pope Francis' greeting to him last Oct. 8 during his special audience, "You have a very important fellow citizen."

A moment of great emotion, underscored by a very long applause, was when the Postulator General noted in the book of Baptisms - where Artemide Zatti was registered on October 12, 1880 - that that child was canonized by Pope Francis on 9 October 2022, emphasizing how holiness is indeed the ripe fruit of baptismal grace.

The celebration continued in the afternoon with the first edition of the "Color Zatti" event: a walk animated by the children of the Boretto music school that captured everyone’s attention; there was an interpretation of the figure of Artemide and the story of his life; moments of games to see who most resembles St. Artemide in caring for others and who is most colorful; with the beauty of the songs of the Salesian school of the Daughters of Mary Help of Christians of Bibbiano.

All this accompanied by the "Hurrahs" for St. Artemide and Jesus along the route that took the pilgrims to some of the most significant places in the life of St. Artemide, attracting the curiosity of many who stopped along the way with their mouths open as they watched the river of people pass by. In fact, there were about 500 participants, of all ages. A true people's experience, culminating in prayer in the basilica and ending with games, snacks and music in the oratory, always under the reassuring gaze of the Auser volunteers. A first edition to give thanks for, so beautiful that it has already given rise to the desire to organize the second.

"Saint Artemide gave a sign of his presence, precisely by making different realities and generations walk together. Holiness unites people of goodwill and eager for happiness," commented Fr. Cameroni.