Nicaragua - Rector Major: "Do not be afraid to let what comes from God resonate in your heart." 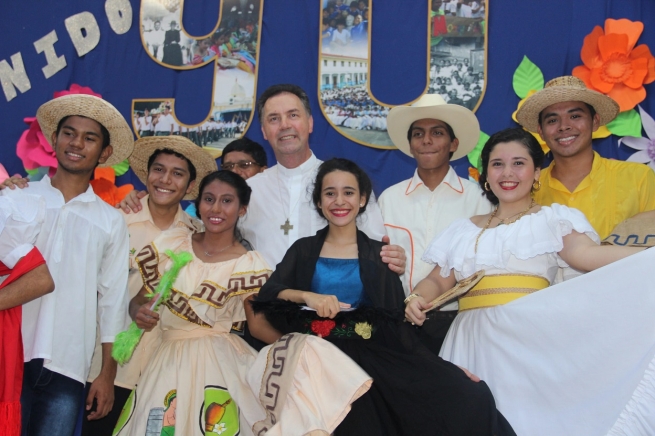 (ANS - Managua) – August 30 was the first day of the visit of the Rector Major, Fr Ángel Fernández Artime, to Nicaragua. It started with a big meeting in an educational centre of the Daughters of Mary Help of Christians.  According to one estimate, there were about three thousand children, adolescents and young people present. The enthusiasm of the young people of Nicaragua was in tune with the strong heat both inside and outside the Institute.

Some representatives of the young people posed questions to the Rector Major. They wanted to know what constitutes a life project. The response was immediate: "It is the dream that guides your life, you listen to what the heart feels, and you take on the job as a vocation". The issue of women's equality was another topic. The Rector Major pointed out that society and the Church, both owe much to the woman. On the theme of the family he encouraged his listeners to take care of family love. Nothing can take the place of the family; rather, the family can never fail.

At noon the Rector Major had lunch at the Don Bosco Youth Centre in Managua, in the company of the Salesian Cardinal Miguel Obando, of the Archbishop and of Cardinal Leopoldo José Brenes. Bishop Abelardo Mata SDB was also present at the lunch.

In the afternoon the Rector Major went to Masaya where the members of the SYM and young people of the Salesian schools were waiting for him. The reception was fantastic. Artistic groups presented some spectacular folk dances in which the Rector Major took part more than once to the delight of the young people.

Later Fr Á.F. Artime met a more limited audience of leaders of the Salesian youth groups in the country. In this meeting, the Rector Major said: "Have dreams, and do not ever give up on your dreams. These dreams will make you great people."

In the midst of a conversation with the young people, he asked one of them called Carlos, "Why did you decide to study economics?" "A dream is not realized through economic proposals: young people must make plans for the happiness of their lives." "It is important to dream how you want to be happy." "Let nobody be afraid to let what comes from God resonate in your heart."