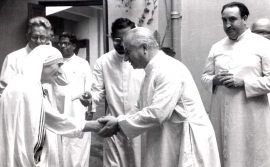 Mother Teresa encouraged Salesians to work for children found in the streets. “We shall take care of the girls, you take care of the boys” she said when Fr Anthony Thaiparambil started Ashalayam Project in the same room rented by Dominique Lapierre author of The City of Joy in Howrah’s Pilkhana slum in 1985.

Former Ashalyam Directors Frs Mathew Parakonath and George Chempakathinal recall how MC Sisters at neigbouring Shishu Bhavan in Pilkhana came to their assistance in the early stages of hardships. Mother Teresa came for the blessing of the first Ashalayam shelter in 1991 at Belilious Road, Howarh and for second Ashalyam shelter at Bhattnagar in 1995. She also came for the inauguration of Ashalayam for girls started in 1993, under the care of Sisters Adorers. Until 1995 Christmas, Ashalayam children would go Carol singing to Mother House to share the Christmas spirit. Mother would come down, be with the children and distribute cakes to all.

Founder director of Snehalaya home for street children Fr Lukose Cheruvalel recalls how his desire to work for the street children was born in 1991 as assistant Headmaster of Assam’s premier Don Bosco School Guwahati when he invited Mother Teresa to address students. When he shared his thoughts with Mother Teresa she assured him of her collaboration saying, “My Sisters will give you all the boys.” That desire became a compelling call as Fr Lukose sat at Netaji Indoor Stadium in Calcutta witnessing the state funeral accorded to Mother Teresa on 13 September 1997. On returning to Guwahati he resigned his job as secretary to archbishop of Guwahati and started his work for street children. The MC Sisters took care of the boys of Snehalaya for six months at MC Home Baralumuk, Guwahati.

Salesians and MC Missions in Yemen

The Indian Salesians were invited to take up the mission of Yemen in 1987 when Giovanni Bernardo Gremoli O.F.M. Cap., was the Apostolic Vicar of Arabia and have continued rendering their services through priests from Salesians of Don Bosco Bangalore province till 5th March 2016, when the last Salesian who stayed back in Yemen Fr Tom Uzhunnalil was kidnapped. Fr Tom followed the footsteps of his uncle Fr Mathew Uzhunnalil who was the pioneer in Yemen.

It was in 1986 that Fr Joseph Kezhakkekara, then provincial of Calcutta invited Mother Teresa to address the general chapter of Salesians of Don Bosco at their Generalate in Rome. After addressing some 200 chapter members from over 90 plus provinces representing some 120 plus countries, Mother Teresa made a surprise appeal to then Rector Major Fr Egidio Vigano.

“I would like the Salesian Congregation to help my Sisters working in Yemen said Mother Teresa,” recalls Fr Kezhakkekara now in New Delhi.

He adds, “Coming out of the Aula Magna of the Generalate Fr Vigano was quick to ask the Provincial of Bangalore province Fr Thomas Thayyil to send priests to Yemen.”

Parish priest of Auxilium parish (estd. 1974) Fr John Puthiyedathuchalil says, “our parish boasts of four centres of Mother Teresa including the first shed in which Mother started her network of institutions since 1950 in Motijheel which today has some 600 Catholic families, Prem Dan and Shanti Dan run by MC Sisters and Deepshikha complex which has an AIDS rehabilitation centre run by MC Brothers.”

Fr Kuzhipala Sebastian former parish priest of Auxilium was a close associate of Mother Teresa. He established the Hathgachia Christian colony in early 1990s, which the Kolkata Municipal Corporation tried to demolish depriving poor Christians of their shelter. Fr Kuzhipala had Mother Teresa act in a most dramatic way to stop the Corporation bulldozers that came to clear the colony.

Later, Fr Kuzhipala as parish priest of Berhampore also had a life size statue of Mother Teresa installed in front of District Magistrate’s Office in Bengal’s Murshidabad district to mark her 10th death anniversary in 2007 along with a 3-day Mother Teresa international Film Festival hosted at iconic Rabindra Bhavan.

Since 1977 Christian institutions were forbidden in the northeastern state of Arunachal. Young Salesian priests Fr Jose Chemparathy (Itanagar), Fr Job and George Palliparambil (now Bishop of Miao in Arunachal) were working in Borduria of Arunachal area in the early 1980s. In a chance meeting of Fr Chemparathy with Mother Teresa in Calcutta in 1986, she expressed desire to send MCs to Arunachal. In 1992 the MC Sisters had their first home at Pappunalla near Naharlagan close to state capital Itanagar and their second home in Borduria which Mother visited in 1993.

Archbishop emeritus Thomas Menamparampil of Guwahati recalls Mother Teresa, as a cleric in Salesian seminary at Bandel in 1958. As former Bishop of Dibrugarh and newly appointed Archbishop of Guwahati, Thomas Menamparampil accompanied Mother Teresa by car from Guwahati for the blessing of the first church in Arunachal at Borduria in 1993. Mother sacrificed Pope John II’s invitation to go with him to World Youth Day in Denver to be in Arunachal.

“Mother gifted me seven convents in the dioceses of Dibrugarh and Guwahati,” Archbishop said. He also recalled how Mother Teresa threw the miraculous medal of Our Lady over the Berlin Wall and after its collapse in 1989, gifted 15 convents (signifying 15 decades of the Holy Rosary) to the former USSR countries.

Other Salesians and Mother Teresa

Salesian Provincial of Guwahati and President of Conference of Religious India Fr Thomas Vattathara claims of miraculous healing by Mother Teresa’s favour and has put together a calendar of civic and religious events to mark St Teresa of Calcutta’s sainthood in Guwahati. He is leading a team of eminent artists from Assam to the Rome celebrations.

Mother and her sisters were frequent visitors to the historic Marian shrine of Our Lady of Happy Voyage at Bandel ministered by Salesians. Headmaster Fr Thomas Kayyalackal brought Mother Teresa to Bandel St John’s School for its 125 year celebrations held in 1995 and organized a civic reception for Mother.

Fr Jacob Iruppakaattu of Nitika Communications Calcutta had the first CD album of 10 songs on Mother Teresa entitled “Flame in the Slum” composed and released just 60 days after her death in 1997.

For her beatification in 2003 then Nitika director Fr C.M. Paul brought out a 16 minute video dubbed into nine Indian languages, from rare Mother Teresa slides entitled “Blessed Teresa of Calcutta.” The short film was curtain raiser for MTIFF 1 & 2 (Mother Teresa International Film Festival) which he founded and directed in 2003 and 2007.