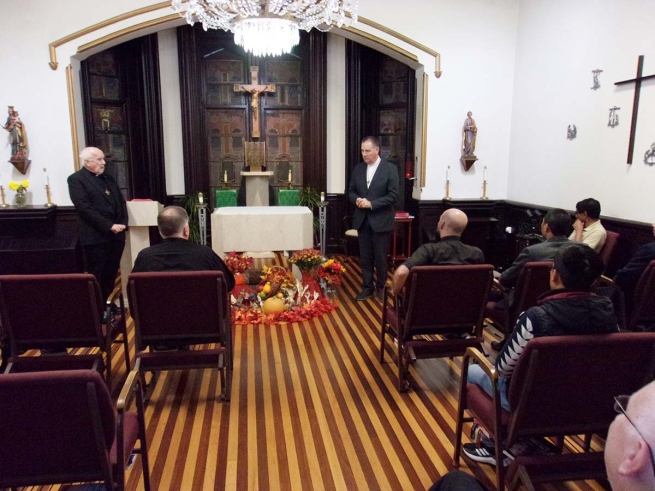 Fr. Ángel was met at the front door and welcomed by the confreres of the local community. After a short break, he joined the community for Evening Prayer and gave the Good Night, explaining the purpose of his visits to all the provinces:  to get to know each province better, to thank the Salesians for keeping Don Bosco’s charism alive, and to encourage them to continue doing Don Bosco’s mission.

He also explained that seeing the United States is so very different from just reading about it.  He noted his joy at seeing Fr. Timothy Ploch, former general councilor again, and commended the way that Fr. Timothy Zak has guided the province since taking up its leadership at the difficult moment five years ago.

Fr. Ángel had just helped the U.S. Western Province celebrate its 125th anniversary (1897-2022) and is initiating SUE’s 125th anniversary (1898-2023). All celebrations of our history, he remarked, should look back at the rich experience of the past and should point us toward a promising future, however different these times are in contrast to past years.  Realities change, but the Salesian charism stays the same, he said.  He has noted the great diversity of the people and culture of the U.S., and believes this diversity is the way forward for the country and for the Salesians.