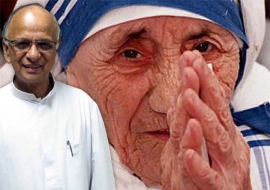 (ANS – Kolkata) – Mgr Thomas Menamparapil, SDB, the apostolic administrator in Jowai met Mother Teresa in 1958, when he was in the seminary at Bandel, Kolkata. Here are some of his impressions and thoughts as a close associate of Mother and later as Bishop of Dibrugarh and Archbishop of Guwahati.

What impressed me most when I met Mother Teresa as a young seminarian in 1958 was her self-forgetful attention to others, especially the poorest, combined with her bubbling enthusiasm, and unfailing resilience in the face of difficulties. Her dynamism was combined with spiritual depth, a profound sense of vocation, and contagious joy. (…)

If Mother Teresa has a message for our times, it is precisely about the dignity and worth of the human person, no matter in what fragility the individual is clothed. For Teresa, it was not a loss of time waiting on the blind and the deaf and the dumb or on lepers, or attending to their basic needs. She saw the ‘glory of God’ shining through the eyes of dying persons. Whether a person was in rags, covered with dirt, smelling at the sores, or showing extremely bad mood, that individual was a human being, in fact Jesus himself.

We are living through an era in which the dignity of the human person is affirmed most solemnly. At the same time, we also hear of theories that would amount to reducing the human person to being the end product of an irrational process, from an accidental clash of atoms, or a haphazard combination of blind drives and instincts. Just a meaningless marvel! (…)

If the worth of the individual is so great, his/her life must be equally precious. Lack of love for life is lack of love for humanity, whether the person concerned is in the womb, the cradle, the school, society; or caught up in debt or hatred, dubbed a terrorist, or terminally sick. (…)

What a baby in the womb or a person in his final moments needs is not the rejection of abortion or euthanasia, but the acceptance of love and a sense of belonging. To offer that is our duty. (…)

The best effort of human civilizations in every period of history has been centered around an effort to save, enhance, and prolong life. Cutting off human lives invoking noble causes and religious principles is sacrificing to Moloch. How slow we have become to realize that violence is just a part of the suicidal instinct of a society! In such contexts, Mother Teresa has a message. Lifting a street victim in her arms, she cries out to the world “Life is precious”. (…)

The saint from Kolkata seems to remind the world that a human being is not merely a cog in the wheel of Modern Economy. He/she is more than a producer and a consumer. Any individual may be called to be an artist, a prophet, a sage or a saint; a hero/heroine in any field of life.

Truly, the most ordinary people have a vocation to live extraordinary lives. How can a person discover and unveil the hero within? Mother Teresa has shown from the obscure slums of Kolkata - where she caught the attention of the world, how this can be done.