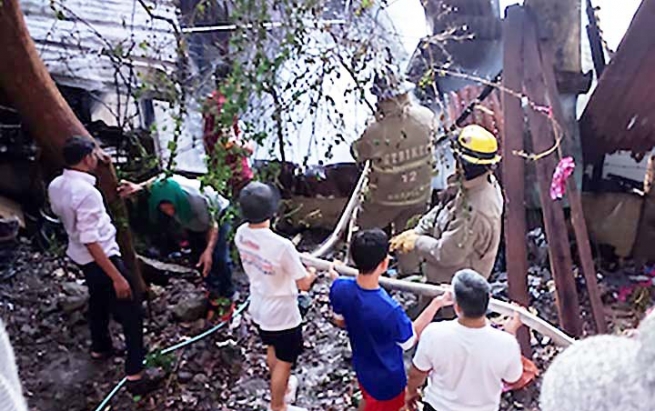 (ANS – Parañaque City) – Salesians, students, and lay mission partners of Don Bosco Centre of Studies (DBCS) in Parañaque City responded immediately yesterday, 21 September, to a third-alarm fire that broke out in a section of a community of former informal settlers less than 100 metres from their convent, and welcomed the victims into their campus.

"It was about 4:00 pm. We were waiting for our meeting to start when someone called our attention that a fire was breaking out nearby," said Joey Payas, head of the maintenance of DBCS. Mr Payas and his associate Glicerio Melloso were among the first to respond to the conflagration. Mr Melloso immediately took the firehose of the convent in an effort to contain the fire that was engulfing the house nearest the convent.

Residents of the affected community, more popularly known as Malacañang, fled to DBCS. The wall of the school compound was low enough for them to cross over. They were mostly women and children carrying bundles of clothes, home appliances such as TVs, washing machines and rice cookers, and LPG tanks. They took refuge inside DBCS. A volunteer teacher from the community was quick to gather the kids and bring them to safety in one of the huts on the campus. Some religious sisters who just finished their class in preparation for perpetual profession for the day also attended to them. A number of the kids were crying in fear. "My grandparents were left at home, my grandfather cannot walk," said a girl of about 6 years of age in between sobs. Another girl, about 14 years old, attempted to go with a friend back to the site, worried about the whereabouts of her mother.

While waiting for the firefighters to arrive, armed with the in-house firehose and gardening hose, a group of confreres, lay mission partners and Fr Rafael dela Cruz, SDB (DBCS Dean & President) tried to prevent the blaze crossing over the low concrete wall. Another group of confreres with Fr Ramon Garcia, SDB (Rector, Rinaldi Community) helped the victims salvage and secure their valuables. They also attempted to lead the fire-trucks inside the campus to better address the situation. The last fire brigade to arrive was that of the Philippine National Red Cross Headquarters from Mandaluyong – the only pumper truck that entered DBCS which helped cool the concrete walls and floorings, and remnants of the fire.

Reports from the radio communications of the volunteer police force of Parañaque declared the fire over at around 5:05 pm. Bilog Bautista of the Red Cross confirmed this fifteen minutes later. At 6:15 pm, Meng Vargas from Barangay Don Bosco Riders’ Association who was among the responders to the conflagration confirmed that the situation was under control. Although it had affected at least 50 houses, no injuries or casualties were reported as of that moment.

The fire victims were welcomed in the homes of their neighbours who survived the ordeal. Four families who were living in the houses right at the wall of DBCS stayed overnight in the huts within the campus. Mr Romano, whose family is billeted in the campus, is thankful that they have survived the fire “The fire may have reduced our house and things to ashes… we are still grateful for we are still alive," and jokingly he added, "now we are living in a bigger home!" The Administrator of Barangay Don Bosco visited them. Franciscan Sisters from the nearby Immaculate Heart of Mary College brought them food. The Salesians shared their supper with them. The families, who are migrants from Surigao (a province in the north eastern tip of Mindanao, about 1000 km southeast of Manila), plan to rebuild their houses in the coming days.

The families are now under the care of the local government.