Bolivia - Anita, the volunteer who decided to stay forever in Casa Don Bosco 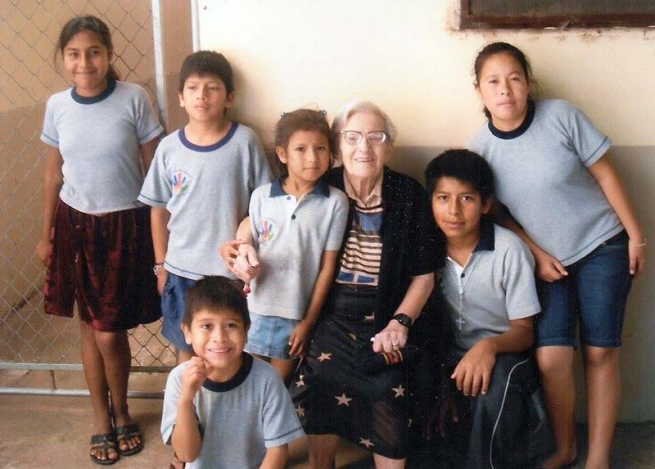 (ANS - Santa Cruz) - Anita is the name of a volunteer. She lived in Trieste up to the age of 70. She was a wife and the mother of a son. She ran a shop but when she was widowed she lost interest in the trade. She was waiting to follow her husband in death. But a letter from Bolivia, published in a local newspaper, convinced her to donate all the money she had set aside.  First, however, she decided to go on a long trip and to settle at Casa Don Bosco in Bolivia.

A letter of thanks from a Salesian, with an invitation to visit the house, made her leave for Bolivia. She went, she saw, she stayed for about three months and finally decided to stay forever. The children of the house had won her heart.

It was in 1994 that she began her "mission" among the children of the "Proyecto Don Bosco." She devoted herself to the service of the house, taking care of the children's clothing. She collected donations of clothing and arranged, washed and repaired them, keeping everything that might be of use. She brought with her everything she had in her home, bed sheets, kitchen utensils, and the like.

She spoke a special language, a mixture of Italian, Spanish and Slovenian - its origin was in fact Slovenian - but everyone understood because it was the language of love.

She nourished her life of service with prayer. She was like a member of the Salesian community, which she joined every morning for meditation, Morning Prayer and Mass. The rosary accompanied her all day. She was happy whenever a group of children joined her in the evening to say the rosary.

She was declared "Cruceña d'Oro" (a citizen of Santa Cruz) by the Italian Circle of Friends. She returned to Italy only once, for the illness and death of her only son. She came back saying, "I do not want to return to Italy, I want to die here and be buried among the children of the house". Her wish came true on 10 September this year. She had just turned 92 years, and had continued to participate in the daily mass.

"A brief, violent illness took her away. We are sure that her smile still accompanies Casa Don Bosco and that her example will become an example for many people," say the Salesians who knew her.