Azerbaijan - Pope Francis: "the reality is better understood from the peripheries than from the centre"
Featured 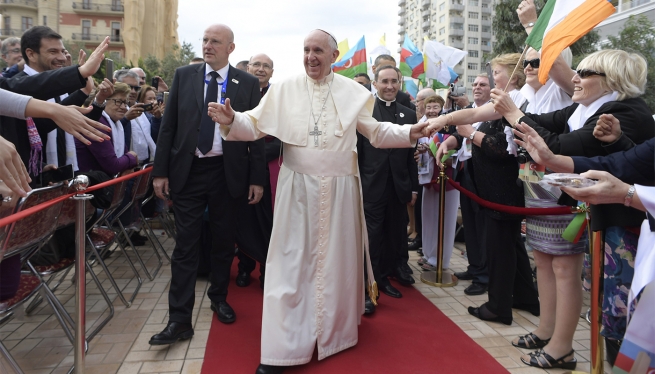 (ANS - Baku) - The meaning of Pope Francis’s visit to the small Catholic community of Azerbaijan - just a few hundred people, with fewer than ten clergy – is to be found in the words he spoke on the plane during the return flight to the Vatican: "I went there for the Catholics in order to go to the periphery of the Catholic community (...). It is really a periphery. It is very small. I said that it reminded me of the small community of Jerusalem, the Church in the Upper Room, waiting for the Holy Spirit (...). As I said, the reality is best seen and better understood from the peripheries than from the centre."

The attention to the peripheries is not something to be shouted about but something to be lived as a testimony.  That is the reason for this visit to Baku, to that little church that is taking root and growing slowly around the Salesian community which has been responsible for its pastoral care since 2001.

The arrival of the Pope at the Salesian centre and his visit to the Church of the Immaculate Conception will remain as an unforgettable experience for the faithful and for the whole local community. So too will the words the Pope uttered during his homily when he spoke of the "two essential aspects of Christian life: faith and service." These two aspects are deeply linked, as the Pope said quoting Saint Teresa of Calcutta: "the fruit of faith is love. The fruit of love is service. The fruit of service is peace."

After the Mass, just before leaving for his other official commitments, the Holy Father gave witness once more of his pastoral care as shepherd of the small Azeri flock.  At the end of the Angelus he spoke again of the significance of his presence "for this small community of 700 people", and offered his encouragement and some practical advice: "Only two things are needed: in that community the Mother was there - do not forget the Mother! -; and in that community there was charity, the fraternal love that the Holy Spirit poured into their hearts. Courage! Forward! Go ahead! Go forward without fear!"

Without doubt, his visit was a great boost of confidence and enthusiasm for the Salesians working in Baku and for all the Christians in the country.