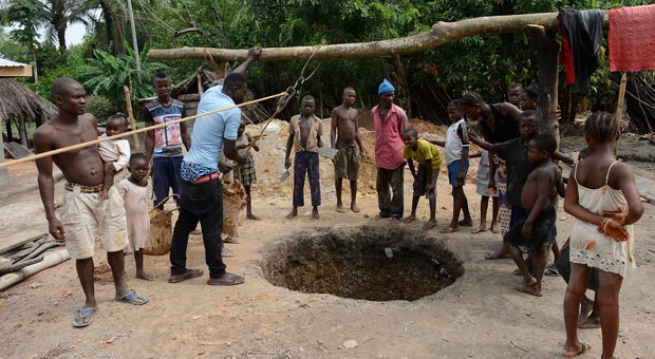 (ANS - Luapula) - The Salesian missionaries in Kazembe, a town in the province of Luapula, have just completed a plumbing project that provides drinking water for young people and families who attend St John Bosco parish, the oratory and the school. Although the area has several rivers and lakes, residents had great difficulty in accessing clean water. The Salesian project involved the drilling of a well in the parish. This means that surrounding communities are now provided with drinking water.

Since 1982 the Salesians have been running a school that offers courses in carpentry and a Youth Centre which is open every day for the young people of the area. Before this project was realized with the help of the Salesian Mission Office in New Rochelle, many young people could not participate in the activities of the parish because they needed to spend most of their time in search of clean water.

The community was facing a health crisis, because many people became sick due to unsafe water. It was quite common also for them to be faced by crocodile attacks when they went to collect water from the river.

The project included the sinking of a well 50 metres deep, followed by the installation of a water pump. Twelve students from the Salesian school helped in digging and laying pipes around the grounds of the church, thus putting into practice some of the skills they had learned in class.

Now that the local population has access to drinking water, students are able to participate fully in educational and recreational programmes offered at the Youth Centre, and there has been a decrease in waterborne diseases in the communities.

"The improvement of water and sanitation services also ensures that teachers and students can work and learn in an environment that promotes good hygiene," say the Salesians.