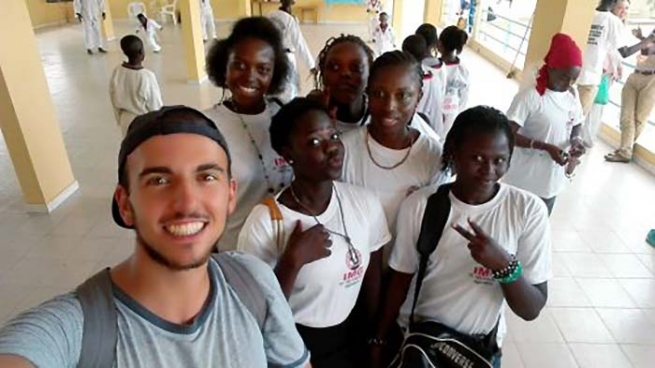 (ANS - Dakar) – International volunteering enriches the lives of those who experience it.  But what is it, in fact? "In Africa I discovered the stimulating world of Development Cooperation and I acquired skills in planning.” So says Leonard, an economics student, who spent two months working with the young people who attend the Salesian Centre in Dakar, Senegal. This is his testimony.

"When my traveling companion, Beatrice, and I arrived in Dakar we were welcomed by Gianpaolo Gullotta and Michel Metanmo from the NGO 'International Volunteers for Development' (VIS). They introduced us to their work in Senegal. My contribution was structured in four distinct elements:

• Design and implementation of ideas to be included in the 'StopTratta' programme. This is a project run by VIS in conjunction with Don Bosco Missions to combat irregular migration. It started in the Tambacounda region to provide young people with opportunities for training so that emigration would not be their only option.

• To carry out a study on 'Microcredit' and remittances from migrants: engines for the development of the Senegalese economy.

• To work as leaders along with about thirty other young people at the Salesian Oratory 'Ker Don Bosco' in Dakar, where the summer camp on the theme 'The citizenship of young people for an emerging Senegal' took place from 8 to 28 August. Each week had a specific theme with related activities. In the first week there were manual activities, making bracelets, necklaces, earrings and key chains. In the second week they held the 'Olympics for children' with the emphasis obviously on sport. The final week was devoted to culture and the theatre with sketches and typical dances.

• To take part in the running of an international meeting at 'Ker Don Bosco' on the management of Human Resources for Planning and Development Offices in Africa and the Caribbean. The meeting was attended by several members of the Salesian Provinces concerned.

All these activities filled my days with commitments that were difficult and really challenging, but at the same time I had the opportunity to test myself in ways outside the narrow field of my university studies in economics.

My goal was to learn constantly and to challenge myself in many different contexts, and I can say without any doubt that the goal was fully achieved."