Kenya - The relic of Don Bosco in Nairobi. "Don Bosco is in Africa, and will never leave us!" 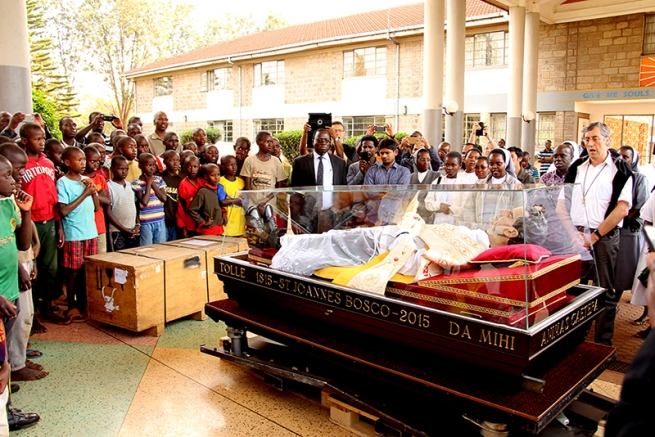 (ANS - Nairobi) - Children and young people were waiting patiently with a curious gaze and with moments of prayer and devotion for the arrival of the relic of Don Bosco at the Salesian House of Utume in Nairobi. The casket containing the relic will remain at Utume until 31 January next when it will be transferred to the Shrine of Mary Help of Christians at the Salesian House of Don Bosco Upper Hill, Nairobi.

The arrival of the casket in Kenya is part of the project to allocate a distinguished relic of the saint to different Salesian Centres around the world, as a sign of unity of the Salesian Family and the global growth of the Salesian spirit. In recent months, similar caskets were brought to Cherrapunjee in India, to Hong Kong, and to Panama.

When the casket reached Utume, the relic was venerated by boys from the Salesian House of Langata and by members of the local Salesian Family, led by the Provincial, Fr Giovanni Rolandi.

Giving the Goodnight the Provincial said:  When I came to Kenya a good number of years ago, there were many things I would not have imagined, even in my wildest dreams! For example that I would have the joy to welcome Don Bosco to our Province: we did so in December 2011, when the casket came around during its world tour,  and that I would welcome him again, this time, as he comes to stay with us for good!

Fr Rolandi said that more than a year ago he received an email from Rome when he was asked if we were willing to accept the casket with the relic of Don Bosco on a permanent basis. The idea of ​​the Rector Major and his Council was to make Nairobi a place of Salesian pilgrimage since Kenya is quite easy to reach from the rest of the continent.

Today that idea is materializing. "It is a privilege: we are hosting Don Bosco in Africa, on behalf of all of Africa-Madagascar! And it is also a challenge for the whole Salesian Family in East Africa!" he added, saying that the presence of the relic will make Don Bosco’s missionary dream and the growth of the Salesians in Africa ever more a reality.

"Don Bosco is in Africa, and will never let us!" he concluded.