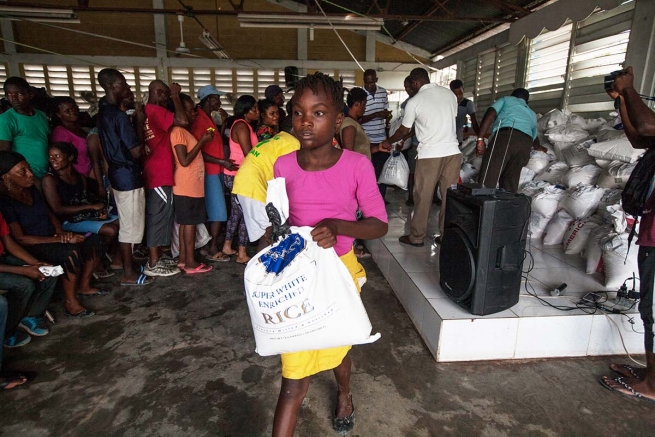 (ANS - Port-au-Prince) - It's been several days since hurricane Matthew devastated the western part of America's poorest country. Aid continues to be of vital importance to many people who have lost everything. The Salesians in Les Cayes, coordinated from the capital, Port-au-Prince, continue to distribute food kits to the people, but they are aware that the emergency phase should last as short a time as possible so that they can focus on rebuilding.

The Rinaldi Foundation of the Salesians in Haiti, who coordinated the emergency that followed the earthquake of 2010, have sent a delegation to the south of the country to assess the damage caused by the hurricane and begin to distribute emergency aid. What they saw was very similar to what appeared after the earthquake: many houses damaged or totally destroyed, crops flooded, roads blocked, trees uprooted and dead animals everywhere.

From the beginning the Salesians and the volunteers in Les Cayes have been offered different kinds of support to those in need, in the city and in the surrounding communities.

They foresee four main areas where help will be needed:

RECONSTRUCTION: The Foundation is also preparing the distribution of building materials for those affected by the earthquake, so that they can repair their homes or rebuild them.

AGRICULTURAL PRODUCTION: to promote the cultivation of the earth and contribute to food security, the Salesians are planning to start distributing seeds and agricultural tools to those who lost their crops, and with them their livelihood. About 500 farmers will benefit from this project, which will also allow the resumption of economic activities in selected areas.

EDUCATION: is the area which constitutes the main objective of the Rinaldi Foundation. The project includes two aspects: intensive training for 300 young people in the construction industry (metallurgy, carpentry, welding ...); and granting scholarships to students who otherwise could not continue their studies.