Myanmar - 700 young people warm the heart of the Rector Major 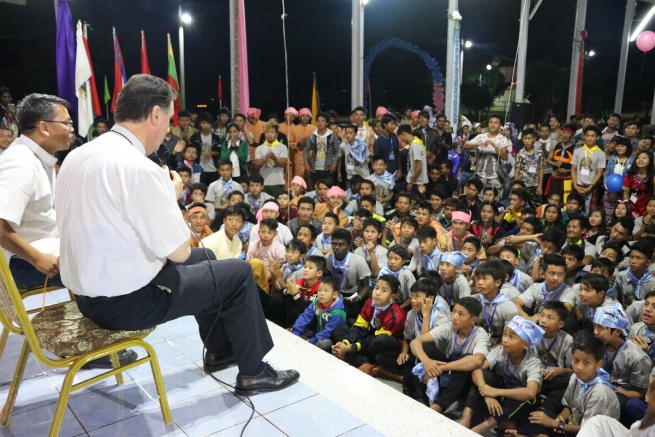 (ANS - Anisakan) – The Rector Major, Fr Ángel Fernández Artime, spent the afternoon of 28 October with young people and the Salesian Family. The one-hour meeting with 700 young people from various Salesian houses was an experience that warmed the heart of the Rector Major.

In his message to the young people the Rector Major emphasized the importance, in the life of a young person, of being happy, and he also stressed the need for them to live their vocation with enthusiasm. He challenged the young people to listen to the call to religious life, in particular the call to become Salesians or Daughters of Mary Help of Christians.

The young people then addressed some questions to the Rector Major about his family, the story of his vocation, what makes him so cheerful and enthusiastic, how does he overcome difficult moments, and so on. One of them asked him to encourage the Salesians in Myanmar to accelerate the programme of vocational training centres in order to help young people to find a decent job and fair pay. The Rector Major answered their questions with love and affection, and the young people were happy with his answers.

They concluded the meeting by singing with the Rector Major, and this proved to be a very moving moment. The young people had come together to sing from the heart. In fact, music has now become a way of communication between the Rector Major and the young.

Later Fr Á.F. Artime visited the house of the Daughters of Mary Help of Christians called Mornese, and was greeted by a warm welcome from the sisters and girls. The conversation was full of joy and happiness. All the FMA who work in the country were present.

The Rector Major then also met the five novices while walking in the Novitiate compound. He encouraged them to seek the will of God through prayer and reflection. He told them that to become Salesians they must configure their hearts to the heart of Jesus, the Good Shepherd.

Next the Rector Major met the Council of the Vice-Province of Myanmar. He stressed the importance of the Council’s role of leadership and government.

The day ended with dinner with the Salesian Family: SDB, FMA, Past-pupils and some lay collaborators, around a hundred people, accompanied by a traditional Burmese music show. The cultural representation continued until 22.00 and highlighted the ethnic diversity of the five states of Myanmar.