Italy - Solidarity Race: for mothers and children in Bangui
Featured 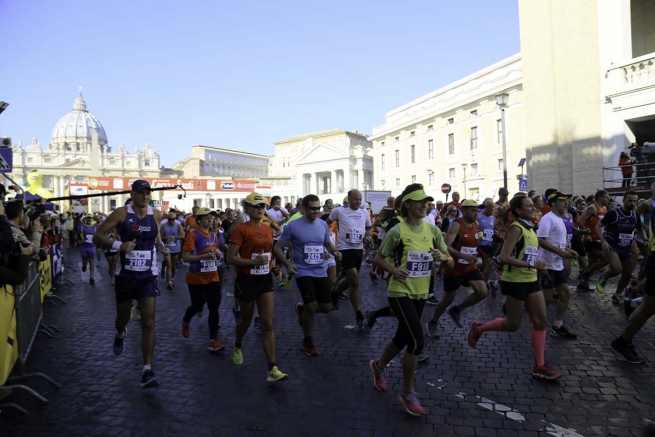 (ANS - Rome) - Yesterday, 1 November, Solemnity of All Saints, the ninth "Race of the Saints" took place in the shadow of St Peter's. This is an event that is growing every year. It attracts thousands of dedicated sports enthusiasts who are also committed to solidarity. The 2016 event was divided as always into two races - competitive and non-competitive. The runners numbered more than 6500 - a new record for the event.

Before the race, as is customary, the athletes attended Mass in St Peter's Basilica. The main celebrant was Fr Manolo Jimenez, Rector of the Generalate of the Salesians, for several years a missionary in the Salesian Vice-Province of Tropical Equatorial Africa. The proceeds of this year’s solidarity project will go to the Salesian work in Bangui which belongs to that province.

For the record, the men’s competitive race of 10 km was won by the Moroccan athlete Mohammed El Mounim, with a time of 29m 26s and the women’s race by the Rwandan Mukasakindi Claudette, who finished on her own in 35m 54s.

The race was broadcast live by the Italian TV Channel 5 in a special edition of "Il Cammino" produced by the journalist Paola Rivetta. It included an invitation, repeated several times, to contribute with a small gesture of solidarity to the campaign of the DON BOSCO IN THE WORLD Foundation "Protecting mothers and children to build peace," which is associated with this year’s race.

By contacting the number 45524 - with a text message or a call from a mobile phone or fixed line - up until midnight of today, 2 November, you can support the renovation of the Salesian buildings in Galabadja, a district of Bangui. These include the Saint-Jean Dispensary, which assists especially mothers and children; the primary school, which forms the values ​​of friendship and solidarity; and the Youth Centre which offers a place of health and safety to the people of Bangui, especially the most vulnerable.

Further information is available on the web page of the DON BOSCO IN THE WORLD Foundation.