Belgium – Work-Life-Balance 4.0 – Challenges in a time of digitalization 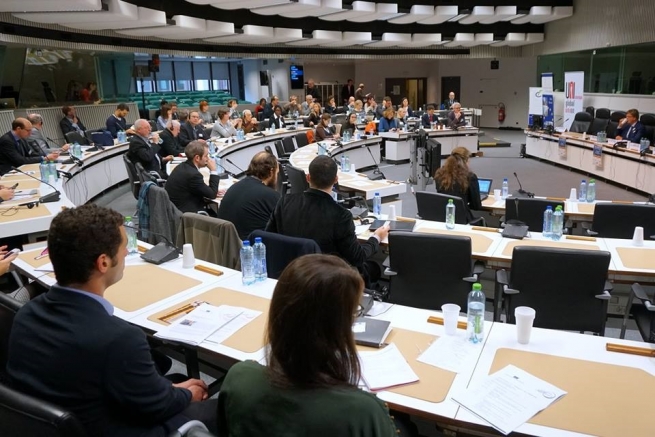 (ANS – Bruxelles) – On 15th November 2016 the European Sunday Alliance organized its third European conference this time on “Work-Life-Balance 4.0 – Challenges in a time of digitalization” at the European Economic and Social Committee. During the day over 100 participants discussed how digitalization will impact all aspects of our lives and how a healthy Work-Life-Balance can be secured. Don Bosco International has been actively involved in the organization of this Conference.

Luca Jahier, President of Group III, European Economic and Social Committee and a supporter of the European Sunday Alliance from the very first beginning, opened the conference, together with the Members of the European Parliament Evelyn Regner (S&D) and Thomas Mann (EPP).

The framework of the conference was set by Günther H. Oettinger, European Commissioner for Digital Economy & Society. He addressed in his keynote speech the transformation and future of work and societies in Europe caused by digitalization. He added that the focus on the impact of digitalisation on the industry was too short-sighted. Digitalisation would change the working world and would further increase the flexibilisation of work. This would improve the reconciliation of work and private life on the one hand. On the other hand, one could not expect everybody to be available at all times.

On the first panel four speakers discussed “New forms of employment - Flexibilisation of working time”. Irene Mandl, Eurofound, explained form a research perspective that digitalisation will have structural effects on the world of labour, which are still ambivalent. Delphine Latawiec, National Centre of Employers Belgium/UNI Europa Commerce, stressed that not all employees could choose their working place or time. Flexibility could truly improve Work-Life-Balance of specific groups of workers. Baudouin Baudru, member of Cabinet of Commissioner Marianne Thyssen, assured the participants that the commission was currently working to ensure that the legal and policy framework would be fit for the purpose.

The second panel focused on the topic “Life beyond work and digitalisation – The need for unavailability”. Evelyn Regner, underlined the value of breaks; not only for the employees but also for the productivity of companies. She was endorsed by H. E. Dr Bruno Feillet, Auxiliary Bishop of Reims. Digitalisation had the potential to bring families together e.g. via Skype and would facilitate access to knowledge. Yet, digital devices would also keep people from speaking with each other. What it means to be a crowed worker was described by Héctor Saz, a specialist teleoperator from Spain. Most crowed workers would work only part-time, during non-typical working hours and were badly paid. The majority of workers in these sectors were young and unskilled; they had more than one job to earn enough money to live on which would make reconciliation almost impossible. Hannes Kreller, Alliance for the Free Sunday Germany, stressed the importance of synchronized free time to participate in a social life, in sports or culture. Digitalisation would create new forms of societal engagement and activism said Ingo Dachwitz, Editor of netzpolitik.org and youth delegate in the Synod of the Protestant Church in Germany (EKD).

On this occasion the European Sunday Alliance also launched a Resolution for a better work-life-balance and synchronized free time in the age of digitalization. The Resolution is aimed at activating civil society and politicians to use the opportunities for a better work-life-balance and to limit the risks created by Digitalization for the benefit of all European citizens.

The Resolution is still open for signature.