Germany - Petition to the German Bishops' Conference: make the Bible free for the twenty-first century! 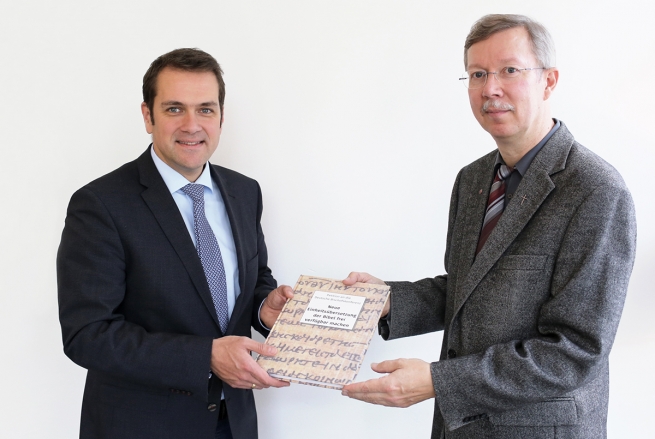 (ANS - Cologne) - "Freely you have received, freely give" (Matthew 10: 8b). This is the command that Jesus gave to those who proclaim his message. It is still relevant for the whole Church. In this spirit more than 2,000 people have signed a petition promoted by the Salesian Fr Hatto von Hatzfeld, to request that the Catholic Church’s official German version of the Bible be made as free as possible on digital media.

The petition, signed by many priests, theologians, religious educators and pastoral workers, was delivered on 17 November in Cologne to Doctor Ralph Poirel of the Secretariat for Pastoral Care of the Bishops' Conference of Germany.

In September, the two main German-speaking Churches presented their new official translations of the Bible which are also intended for liturgical use. The Catholic Church has adapted its "einheitsübersetzung" ("unified translation" of all the dioceses of the German language) to today’s current language and the results of exegetical research. On the occasion of the 500th anniversary of the publication of Martin Luther’s 95 theses, the Protestant Church produced a linguistically updated edition of its translation, under the title "Lutherbibel". However it is expected that these two new translations will remain protected by copyright and may not be used freely.

"If the previous edition had been distributed under an open licence we would already have had for some time a better presence of the official German translation of the Catholic Church Bible on digital media," Fr von Hatzfeld said after delivering the petition. "There are software developers who would like to use these texts in an innovative way on digital media, thus contributing to the spread of the Bible in the edition of the Catholic Church and that of the Lutheran Church. Until now, however, they have been hampered by copyright."

Fr von Hatzfeld can see the advantages of an open licence also for printed editions of the Bible: "The Church should be grateful and look favourably on the widest possible dissemination of Sacred Scripture". He believes that fears of possible abuse are unconvincing: an open license could include the condition that the text be spread without alteration.

For more information, see the petition and the page on Facebook.