RMG - "Go and bear fruit. The fruitfulness of the prophecy" 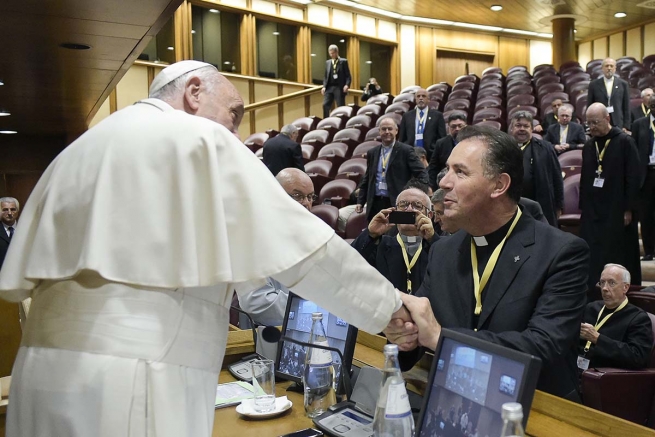 (ANS - Rome) - "Go forward with courage and without fear! The one who never makes a mistake never does anything!” This is the message with which Pope Francis last Friday 25 November greeted  about 140 religious, representatives of many congregations, gathered in Rome for the 88th General Assembly of the Union of Superiors General (USG). His address was the final act of the Assembly which had taken place over the previous two days at the Salesianum in Rome, on the theme "Go and bear fruit. The fruitfulness of the prophecy."

In his conversation with the religious, which lasted about three hours, the Pope answered many questions of the superiors and offered many ideas. On the specific theme of the meeting, he pointed out that the task of religious is to live the Gospel to the letter, without adding to it, and so give testimony to the world. About their relationship with the local Churches, he highlighted the importance of religious feeling fully engaged in diocesan life and enriching it with their respective charisms. He asked them to be creative with young candidates for religious life and to be vigilant in the stages of discernment, to prevent possible scandals due to the immaturity of the members accepted. Finally, he mentioned the importance of service to the poor saying: "If the Church does not work with the poor, it is not the Church ... The Church must be poor with the poor!"

In the previous two days at the Salesianum, the religious superiors had several sessions of reflection and discussion. The proceedings were opened by the Dominican, Fr Bruno Cadoré OP, who presented the challenges ad intra and ad extra.

There was a roundtable session at which Fr Fernando Millán Romeral, Carmelite,  Michael Perry of the Friars Minor, and Bro. Emili Turu of the Marist Brothers, gave inputs on the value of lifelong learning without which the whole apostolate fades; the prophetic value of truth even in the face of scandals that can threaten the reputation of a congregation; and the "Lavalla200" experience of the Marist Brothers which inspired them to a better integration of inter-culturalism and empowerment of the laity in their communities.

On the second day Fr Pascual Chávez, Rector Major emeritus of the Salesians reminded the Superiors General of the importance of knowing how to accept the challenges of the present time as the only way to make room for young religious.

Further information is available on the website "Vidimus Dominum".