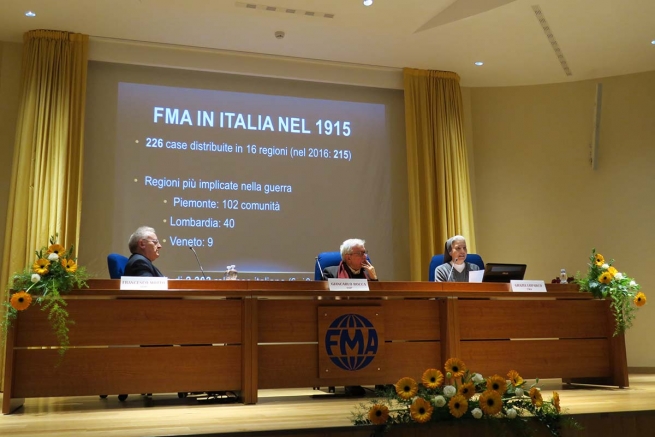 (ANS - Rome) - A round-table conference on the theme "Salesian Solidarity during the Great War (1915-1918)", was held at the FMA Generalate in Rome on 30 November. It was organized by the Institute of the Daughters of Mary Help of Christians (FMA), in collaboration with its new Study Centre.

The Mother General, Mother Yvonne Reungoat, welcomed the participants. The Vicar and several General Councillors were present. The coordinator was Fr Giancarlo Rocca, historian and director of the "Dictionary of Religious Institutes". He summed up the overall action of the Religious of Italy during World War I as follows: wide-ranging action that involved directly no fewer than 20,000 consecrated people, many of them at the price of life.

Next to speak was Fr Francesco Motto, member of the Salesian Historical Institute (ISS) and current President of the Association of students of Salesian History (ACSSA). He described the dual participation of Salesians in the Italian war effort. Thousands of religious were enlisted and served at the front or in the medical corps. Others remained "at home" to double their service for young people, for the children of those who had been called up as well as orphans and refugees. The spiritual and material support of the Rector Major Fr Paul Albera, the Prefect Fr Philip Rinaldi, the Secretary Fr Calogero Gusman and various Provincials and Rectors constituted an essential and important contribution.

He was followed by Sr Grazia Loparco, professor of Church History at the Auxilium Faculty in Rome, who spoke about the support activities carried out by the FMA in the course of the conflict. For the first time they found themselves operating in a grave national emergency such as war, with the consequence of having to adjust their educational charism and find new forms of intervention: for soldiers in hospitals, in foster homes for babies, in close collaboration with committees of lay men and women, in all kinds of activities for raising money, clothes and other useful items for the military at the front, and so on.

In his final summing-up the moderator pointed out that the generous and varied participation in the war by religious helped to initiate reconciliation in many other European countries with institutions of religious life after half a century of hostility.

The Secretary General, Sr Piera Cavaglià, closed the conference by saying that this story deserves to be known because it is a "school of life" for those called to live the Salesian charism today.