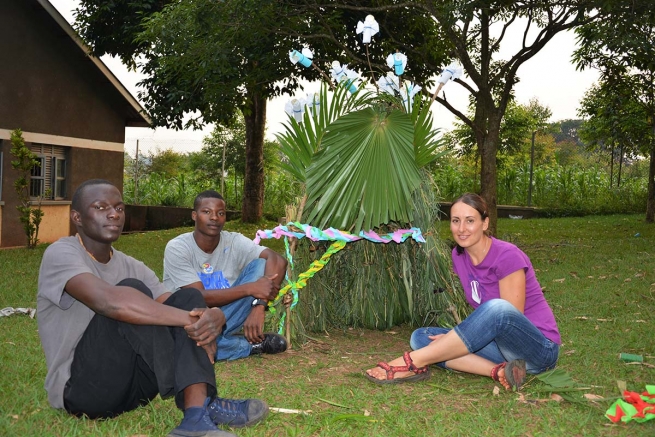 (ANS - Namugongo) - Uganda is a Central African country, with the capital Kampala. Namugongo is about ten kilometres from Kampala and there you will find the "Children and Life Mission" (CALM), a centre for young people who once lived on the streets and survived by stealing.  It is home to young people aged between 5 and 20. Anna Poliszkiewicz, a volunteer from the Salesian Mission Office in Warsaw, worked there for a few months.

This is her story: "With Fr Elie Nyandwi, director of the missionary work of Namugongo, we decided to create a beautiful garden in the centre. The young people helped us and they worked selflessly. Every one of them wanted to participate in the work. Even the smallest, four-year-old Kaukulu, had his part of the garden. Every day, after school he used to come running to me to make sure I had not forgotten to water our plants."

Anna’s job was helping the young people to study. Every day they went over the material. They solved the problems and did their homework together. But not everything went well. Some wanted to study while others were annoying them. One of the boys, who had been in the juvenile prison several times, managed some act of defiance every day – maybe stealing pencils or beating his younger companions. Then he would apologize and promise that this was the last time. But the situation was repeated. He was a boy who was hungry for love and attention. CALM is a centre for street children and for them it is difficult to get the streets out of their system.

One day a truck arrived with rice and clothes from the United States. There was great joy but for some it was also an opportunity to steal. The whole community helped to unload the truck - priests, brothers and teachers. But even so, seven jackets disappeared. After a few days some of the boys admitted their guilt and returned the stolen clothes. Others had hidden sweatshirts in the bushes or in the forest. They hoped that no one would find them.

The creativity of the young people knows no limits. Once they put a small pig into a backpack to carry it and sell it outside the centre. They hoped that no one would be surprised to see a backpack jumping oddly... There are also young people who say they need time and prayer to return to the right path. Now they are an example for others, always friendly, smiling, and ready to help.