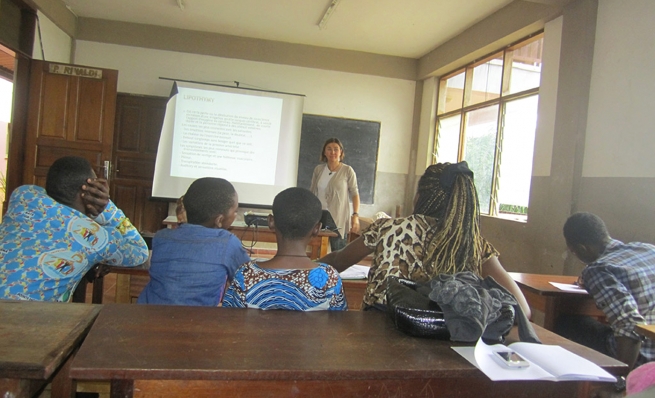 Why did you decide to go on an international volunteer experience?     As a child on Sunday mornings I used to watch documentaries on Africa and Latin America and I was very keen to see what was happening. I think the restlessness for poor countries is still within me. I was curious to know what was happening in Central Africa, how people lived, what was their culture like, what were their values, what was their way of life and its problems.

What were your expectations? What did you expect to find?

To tell the truth, I had no expectations, I just wanted to let myself be surprised.  It is a dangerous country, with a very high level of disease and poor healthcare. Truth demands respect, but the restlessness was greater than all these fears and that was why I went.

What work did you do in Ebolowa, Cameroon?

Our work in the prison was to provide for the needs of prisoners. We talked with them using sport as an excuse. I also distributed medicines according to their needs.  After a lot of talking we managed to organize a medical team to give an adequate response to the needs of prisoners, who were crammed into cells and living in very unhealthy conditions.

In the summer school of the Salesian College in Ebolowa I taught Spanish.     I also gave some formative input and I revised some subjects with different young people. There was an educational programme in Spanish and French on the Community Radio.  I helped in the preparation and also became the announcer.

I also participated in the training of leaders and I gave first aid lessons to twenty of them, speaking French all the time.

What did you learn there, and what have you brought home with you?

I learned more about my inner world, how my inner "I" reacts in front of the reality I saw every day, of extreme poverty and people living such difficult lives. The heart of man is incredible, it is capable of the greatest atrocities, but also of immense love.