Myanmar – Still More Violence: Violence: Over 100 Refugees at the Salesian House of Namtu 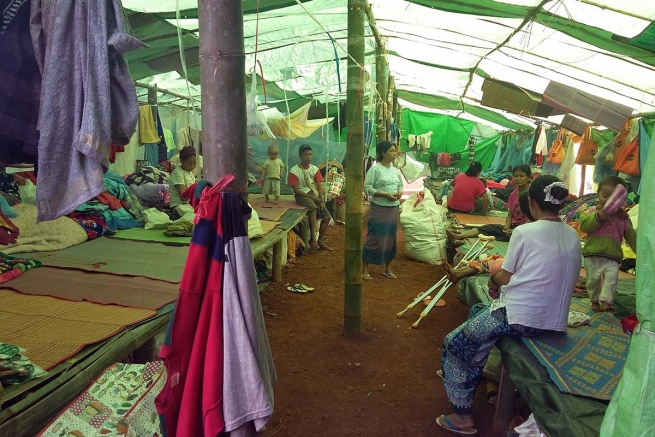 (ANS – Namtu) – “It is urgent to put an end to the wars that still trouble Myanmar and to make 2017 the year of peace”. This, a few weeks ago, was the wish of Salesian Cardinal Charles Maung Bo, Archbishop of Yangon, with regard to his homeland, martyred by decades of war. But there is still a lot of work to do for his wish to become a reality: in Namtu, in the north-eastern state of Shan, where in November there were violent clashes, the situation is tense and tens of people are still hosted in the Salesian parish, the only place where they feel safe.

On November 26th, 2016, in the area of Namtu the conflicts among the armed factions of the various ethnical groups and the government army intensified: the village of Bang Wa, which is part of the territory of the Salesian parish and where the majority of the population are Catholic, was severely hit, and those who suffered most were the most defenceless, women and children. Frightened by the clashes, many people fled and about 160 of them, among whom 50 children and youngsters, found shelter at the Salesian parish.

Thus the Salesian community was unexpectedly faced with a massive arrival of totally needy people who had to abandon their homes in a rush, precisely in the harvest season. Some of these people had been wounded in the clashes, all of them, and in a particular way the little ones, were frightened and traumatized by shooting and explosions.

The condition of precariousness and incertitude continued in the following weeks. “While in many parts of the world Christmas was being celebrated, we lived in anxiety and fear. Peace is still a dream to be fulfilled” is the bitter comment of the Salesians in the area.

At present, the number of displaced people hosted by the Sons of Don Bosco is reduced to 120, among whom 45 children, who are lodged in a parish structure, under the direct care of the Salesian community of Namtu. The population does not feel safe yet to return to their own villages, while by now other crops are lost or burnt.

Even though many houses have been destroyed by bombs and grenades, the Salesian community is grateful to the Lord that He preserved the chapel of the village and the grotto dedicated to the Virgin Mary.