Madagascar –Salesians the the side of “Rascals” 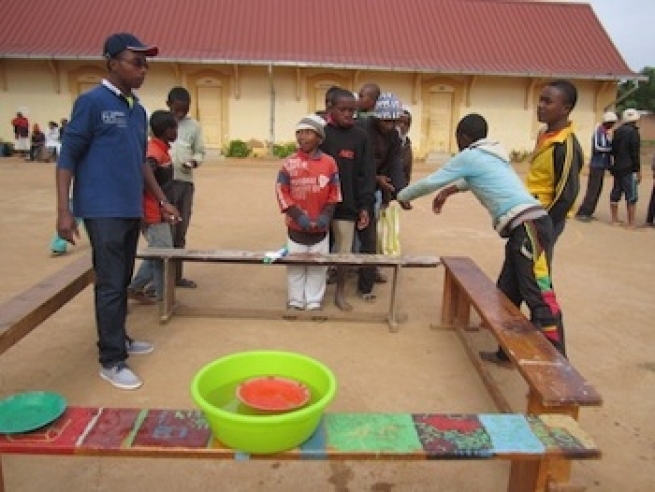 (ANS – Anjanamasina) – In the detention home of Anjanamasina, close to the Capital, Antananarivo, there are minors prosecuted by the law, but there are also children whom the families can handle no more. In slang the structure is called “Trano zaza maditra”, which means, “House for Rascals”. In the last two years the presence of the Salesians, with their novices, in this structure has intensified.

In Madagascar unemployment and precariousness – both economic and socio-political – compel many families to consider the education of their children as a secondary issue in comparison with providing food and facing the exigencies and needs of everyday life. Many children are abandoned and many parents prefer to entrust them to the detention home rather than taking care of them themselves.

Today the three rooms of the dormitory of the Centre of Anjanamasina host 110-115 boys, even though they should host a maximum of 60-70; in winter, the blankets are not sufficient for all and the only available food is rice, which is enough only for 80 people.

Edward is one of the “rascals”: after elementary school he left the family and starting using drugs and living on expedients and small robberies. He returned home, but his parents hit him and he went back to his previous life, until he was arrested by the police.

Njaka is 15 years old, he was born in a difficult area to poor parents who divorces soon. He could not finish his studies and started living in the street. After a bag snatch he was taken to Anjanamasina. He feels lonely, abandoned by his dear ones.

Rado too is 15 years old. After the death of his parents he was entrusted to his aunt who abandoned him after a while. He found a job as a servant in the capital, but since he did not know anything nor anybody, once he got lost, and after wandering for a few days, he was taken by the police and sent to Anjanamasina. Rado is very concerned about his future and considers himself already lost in life!

For Edward, Njako and Rado – and many others like them – Salesians are committed today: every Sunday and on midweek feasts they distribute meals, animate the recreation with music activities, entertainments, sports and do spiritual formation as well with the celebration of the Eucharist and of the sacraments, catechism and screenings of religious and educational character; besides they donate kitchenware, clothes, blankets and whatever the children may be in need of.