Argentina - "Fighting for life in the district of the 'easy trigger'" 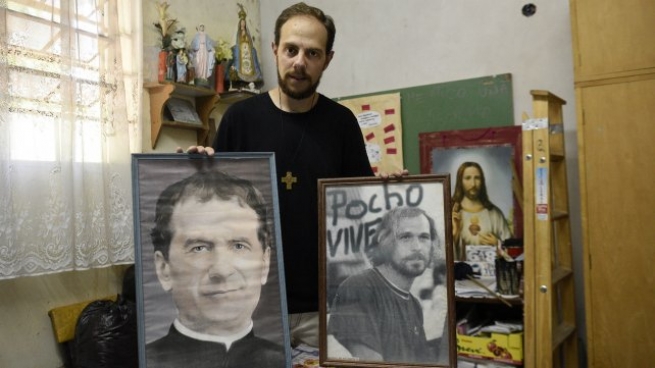 (ANS - Rosario) - Fr Frederick "Chingui" Salmeron, a 29-year-old Salesian with a diploma in drug prevention, works with the young people of the Ludueña district, one of the most dangerous of Rosario, Argentina. Here people live "in the shadow of death", but he, with other Salesians, keeps the community alive.

He says: "I got to know the problem of drug addiction when I was studying in Cordoba, working in the villas miseria, where the Salesians were trying to bring a friendly presence and a real help, especially to the young people who are at greatest risk. Drug addiction destroys people and their families. The first thing to do is to be with the young people, talk to them, share some of their experiences, play football and gain their confidence. This will make it possible for them to allow themselves to be helped and to start again, because left to themselves they will not be able to do so.”

There is a lot of life in the area and a desire to grow. There are a lot of young people and they have no quarrel with us. There is goodness in each one and we learn a lot from them. However, they are living in an environment that brings out the worst in them. There is a lot of domestic violence, child labour, male chauvinism, abuse, drugs and death. For a long time, here, the Church was far removed from the poor areas, but then something began to move.

Yes, in some cases, especially among small children. We are not able to respond adequately with the meals we give because we do not have enough. However, we continue to work with determination in the hope that everyone in the area may find access to dignified work.

Is there a high mortality rate?

There are many honest people who are frightened by the violence and the “normality” of death. There are also families who have lost a loved one but do not have confidence in justice and want to take it into their own hands. Others are so crazy that they see death as a normal means. Society looks to the police and prison system as a way of repression. The system does not want the culprits to be rehabilitated, but prefers to see them rot in jail.

Lorraine is a pupil of the Don Bosco school. She says: "These guys cannot find work and often they do not succeed because they have not finished school. It is the beginning of a chain of rejection that is repeated, bringing them to total marginalization. But they also have dreams. There is goodness in their hearts and there are families that struggle every day to feed their children and raise them in dignity."