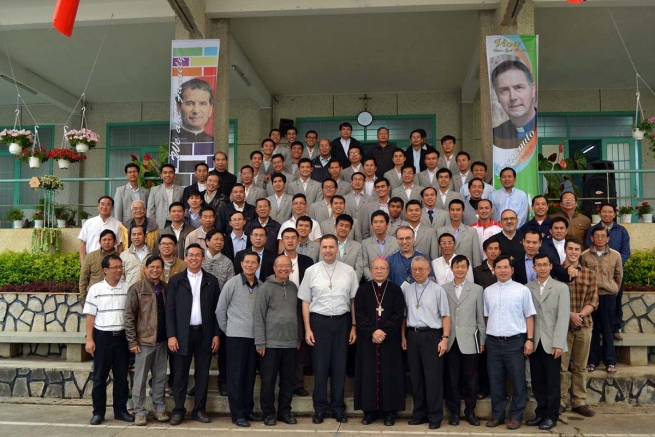 The entire morning was spent in the large Tam Ha compound of the FMA Sisters. They have been in Vietnam since 1961 and now have 270 professed sisters and 43 novices. The morning started with a lively interaction with the migrant school children. Then followed the encounter with the FMA sisters, novices and postulants in the Provincial House. After a brief presentation of 56 years of FMA history in Vietnam, Fr. Angel shared from his heart about the value of communion within the Salesian Family and in a specific way between the SDB and FMA.

After a short 30-minute flight to Dalat airport, the second leg of the visit started. In the Southern Highland region, there are five SDB communities including the Post-novitiate. In the Lien Khuong parish of Mary Help of Christian there was a meeting of the Salesian Family from this region with 500 participants. The whole event was very lively. After a short 30-minute car drive from the Lien Khuong parish the Rector Major finally arrived in the City of Dalat, where he shared a traditional Good Night Talk Don Rua Community.

The Don Rua community in Dalat has the post-novitiate, a quasi-parish, an oratory, a school for migrant children, ministry to university students, and junior and senior aspirants. This community hosted the second meeting of the Salesian confreres with the 10th successor of Don Bosco. More than 80 Salesians (among them 11 Salesian Brothers!) gathered in the Auditorium of the Post-novitiate for three hours of open sharing. According to Fr Angel, these are the most important moments of his animation visits to the provinces. During his first 3 years, he has already met about 7.200 Salesians face to face on these occasions.

During the meeting, he shared: “I encourage all of you, young Salesians to appreciate true communication. (…) The Church in the world does need a visibility. It needs to be visible in the world. We as a Congregation also need to make known the great amount of good that is being done. It’s a false humility to keep quiet about what we are doing. It’s also to give a helping hand to Divine Providence. Yes, but always with great humility”.

He also expressed appreciation for the Salesian charismatic values he had seen and for the culture and numbers of Salesian Brothers (Su Hyunh in Vietnamese, 60 Brothers among 300 SDB) and the strong missionary culture and generosity (120 Vietnam SDB working asmissionaries ad gentes).

He added: “The most dangerous thing is to be satisfied with the old, well-known ways of our mission.” (…) Like Pope Francis he warned about the danger and temptation of clericalism: “Grow as generous and serving Salesians! (…) For the future of the Salesian Charism in Vietnam you need to think more about new works in the North and more education mission in a variety of expressions!”

Due to the presence of seven parish priests (out of 32 in the province) a good percentage of the time was focused on the Salesian identity of our mission and especially of the Salesian parishes: “Don’t worry that your parish might be deeply Salesian - it's the wish of the Bishops and of the Church! (…) Each of the 2200 and more Salesian parishes is entrusted to the Salesian Congregation and local Community, not just personally to the parish priest. This communitarian responsibility is a guarantee of Salesian identity”.

The family-like sharing was concluded with a photo session and a welcome to Bishop Anthony Vu Huy Chuong of Dalat, a good friend of the Salesians.

The afternoon of February 24 in Dalat will be youthful time with about 1200 young people from our Salesian centres around this City including the joint recreation, encounter and dialogue with the Rector Major, followed by the Eucharist and cultural night.

The Youth Meeting with the RM is broadcasted in live streaming: