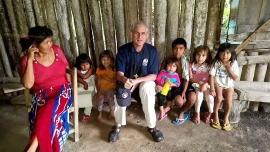 (ANS - Rome) - The Salesian Mission Day is an event that is celebrated all round the world, although on different dates. It offers an opportunity to reflect on the missionary dimension of the Salesian charism. Next Sunday, 26 February it will be celebrated in Italy, with the traditional name "DOMISAL" (Salesian Mission Sunday). The guiding theme will be "... and they stayed with us," recalling the action of the Salesian missionaries among the indigenous peoples of Latin America.

In art. 30 of the Constitutions of the Salesian Society it says: "We look upon missionary work an essential feature of our Congregation."  This is an awareness that is rooted from the beginning in the heart of Don Bosco. He was advised by his confessor to postpone his desire to leave for the missions, but he became the promoter of a vast missionary impulse through his spiritual sons.

As soon as he had the opportunity, he sent his Salesians to the other side of the world. On 11 November 1875 Don Bosco gave the crucifix to the Salesians of the first Missionary Expedition. Since then, without interruption, he and his successors have sent missionaries "to the ends of the earth". At the time of the death of Don Bosco, one in every five Salesians was a missionary.

Don Bosco had a missionary spirit and style. His missionary dreams reveal his will to embrace the world, from Patagonia to Beijing. These dreams show his intimate desire to reach every human being on the face of the earth, because everyone has a right to receive the good news of the Gospel.

Salesian Mission Day will be implemented in different ways throughout Italy and will make use of the different materials produced by the Department for the Missions.

Around this Sunday we will collect offerings for all the Salesian missions around the world, especially the poorer ones, which are directly sustained through the support of the Rector Major.