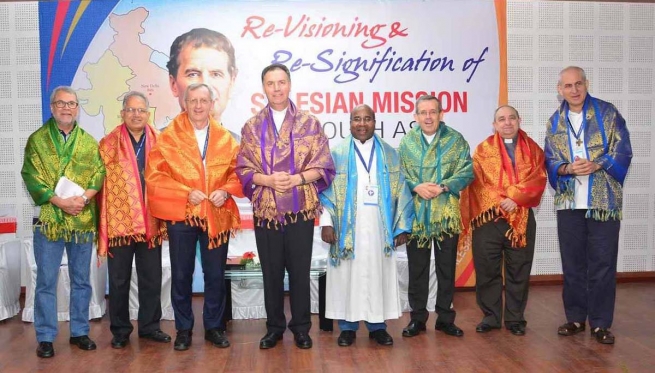 At the Inaugural session Father K. M. Jose, Provincial of Chennai, welcomed the gathering. Father Maria Arokiam Kanaga, the General Councillor of South Asia, in his introductory message, recalled the main theme of the Team Visit which is the verification of the implementation of GC27.

The Rector Major, Father Artime, stressed the importance of the meeting in driving the Salesian mission forward. “We need to deepen our spiritual and mystical life, the poor youngsters are the purpose of our mission and we can achieve this purpose through Education and imparting the Gospel values. We have to share our mission with the lay collaborators and be courageous and open to the Spirit” said Father Artime.

In the first session of the day, the gathering directed their attention to several pressing issues that youth and Christians in general face on a ground-level. For an objective outlook, resource persons from outside the Salesian fraternity were invited to address issues.

Father Michael Amaldoss SJ, a distinguished Jesuit theologian from Tamil Nadu, spoke in depth about the challenges that Christians face. He first explained the Indian scenario today. Economically, India has been progressing rather steadily in the recent years. The rate of growth hovers about 7%, though demonetization may have affected this a little at least for the current year. But in terms of `per capita` income, India remains 126th among about 180 countries.

Fr. Amaldoss clarified the difference between the Church and the Kingdom. The goal or challenge of Christian living is to build up the Kingdom of God in the whole world. At the same time, we also have to build up the Church as the symbol and servant of the Kingdom. The paradigm shift from the Church to the Kingdom and from mission to dialogue should manifest itself through becoming a person who is concerned about Equality and Justice, Gender Equality, being open to the challenge of Pluralism and being aware of the impact of modernity and youth.

Sister Inigo, SSA, the former Superior General of St. Anne`s Chennai tackled the issue of the State of Religious Life in South Asia in the second session of the day, and interpreted religious life through the prism of the Second Vatican Council. She added that according to the CRI statistics of 2016, 1/3rd of religious in India have moved into the social sector with skills and competence to change society. “As Religious we need to be God Centred people. We are seen as good administrators and managers but not for what we are” she said. Mystics see God in everybody and in all things.  We need good pastors: “Without you schools will go on, social work will go on but the sacraments are your monopoly as ordained priests. The poor have the capacity to teach us through their resilience and their faith in God.  Mother Theresa usually said these words - Love Jesus and Love the Poor. We need good Leaders who live authentic lives and preach the Gospel values.”

She then focused on the several positive trends in the lives of the Consecrated in Asia, saying that there is reason to be hopeful as despite the small number of Catholics in Asia, the growth rate of vocations to religious life today continues to increase.

She added that the role of women religious has also been acknowledged in the Church. “Another positive trend is an increasing number of members joining from minority cultures, tribes and other groups. It is an enrichment to live in multi-culturality”, Sister Inigo said.

“If we are serious about being a transforming presence in Asia, then we must embrace a lifestyle following the age-old values of true holiness, contemplation, renunciation and asceticism, detachment and simplicity. We need the courage and the faith of our founders and saints in letting God lead us into paths we did not know, into unfamiliar territories. Let us ask the Holy Spirit to give us wisdom and to set our hearts on fire”, she said.

In the post-lunch session, Archbishop Emeritus Rt. Rev. Thomas Menamparampil SDB touched upon the various challenges and perspectives of Salesian life and mission in the South Asia region.

He highlighted 20 pressing requirements that Salesians need to address, namely, inviting thought in society for needed corrections, paying attention to sensitivities of people, ensuring dialogue is maintained between stakeholders, serving the Young at Risk, highlighting the dangers of commercialism and imparting a sense of social responsibility, among others.

Though we do not directly get involved in politics, as citizens we have a right and a duty to exert the right sort of influence on prevailing political trends. Apart from casting our vote consciously for the right candidate, our `enlightened` opinion is a positive force in public life. Directly or indirectly we shape others` views as well.

``Salesian fervour does not consist in mere worship of the Salesian past, its heroes/heroines, its earlier achievements, symbols associated with history, mechanical imitation of the past. It consists in living out the values that led the Congregation to achievements and its members to greatness,` Archbishop Menamparampil said.

Father Godfrey D`Souza, the Provincial of the Mumbai Province, then presented the statistics of Salesians in South Asia. He stressed that the South Asian Region is the fastest growing and developing Region at the world level, consisting of 12 Provinces, 2791 Salesians, 426 houses, working directly in seven countries - namely India, Bangladesh, Kuwait, Nepal, Sri Lanka, UAE and Yemen.

Father Francesco Cereda encouraged Salesians to accompany young Salesians and to promote the Salesian Brother vocation to religious life.  Father Eusebio Munoz, the delegate of the Rector Major for the Salesian Family, emphasized the importance of the Laity in the Church, and the need to focus on animating the Salesian Family.