RMG - The Rector Major Travels to Chile for the centenary of the death of Msgr. Fagnano 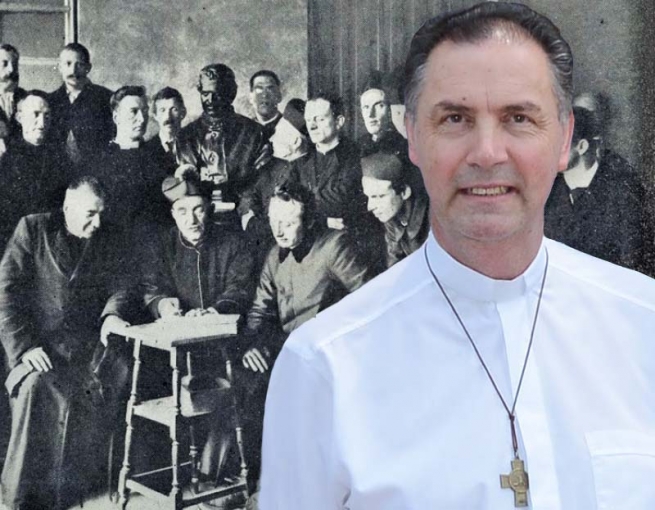 (ANS - Rome) - A few hours after the end of the Team Visit to the East Asia-Oceania Region, Fr Ángel Fernández Artime, along with his secretary, Fr Horacio López, set out again on Tuesday 14 March on another intercontinental journey, this time to South America. In the next few days he will first visit Chile, because of the centenary of the death of Msgr. Fagnano, and subsequently preside at the Team Visit to the American Southern Cone Region, at Ypacaraí in Paraguay.

Giuseppe Fagnano (1844-1916) was a Salesian missionary sent by Don Bosco with the First Missionary Expedition of 1875. He was for 33 years the Apostolic Prefect of Southern Patagonia, Tierra del Fuego Islands and the Malvinas Islands. To honour his memory, several initiatives were organized both in his native land in Piedmont, Italy, and in Chile. The Vicar of the Rector Major, Fr Francesco Cereda, took part in the events in Chile.

Fr Á.F. Artime is now coming at the conclusion of this important anniversary in the country. After a stopover in Santiago on the evening of Thursday 16 March, the Rector Major, accompanied also by the Regional Councillor, Fr Natale Vitali, will arrive on the morning of Friday 17 March in Punta Arenas, the main city in southern Patagonia. There he will take part throughout the day in various functions in honour of the Salesian missionary prelate. He will then meet with young people who attend the Salesian houses of the city and finally the community of the Daughters of Mary Help of Christians.

Saturday will be devoted to a visit to Dawson Island, where there was an important Salesian mission in the late nineteenth and early twentieth century.

On Sunday 19 March, the last day of his visit to Chile, the Tenth Successor of Don Bosco will be with the local Salesian Family. He will visit the Salesian Museum of "Maggiorino Borgatello" and the Salesian Mausoleum of Punta Arenas.

On the morning of Tuesday 21 March, Fr Á.F. Artime will be in Paraguay for the start of the Team Visit.