Peru - Rains and Floods: "Give me a hand, Peru" 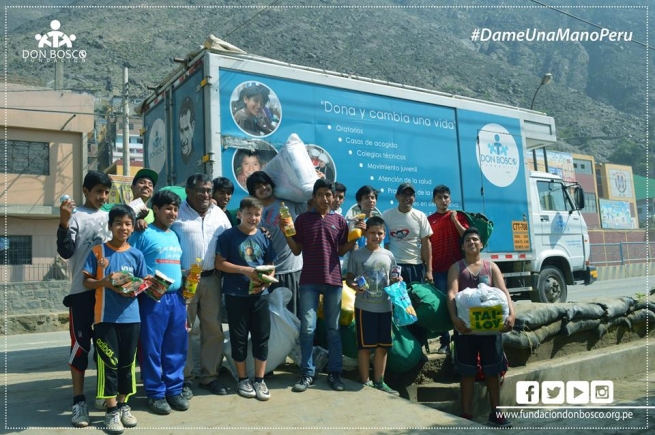 (ANS - Lima) - The National Information System for Prevention and Attention to Disasters (SINPAD) in Peru reported that to date there are 75 dead and 20 missing due to bad weather since the beginning of the rainy season. These are joined by over 103 813 people who have suffered loss, 665 313  people affected by the phenomena and 263 wounded. They report 10,538 homes flooded, 12 378 homes uninhabitable and 145 421  affected to a lesser extent.  In recent days the rains have eased and the extent of the disaster can be seen: houses destroyed or flooded, trucks and cars stuck in the mud, roads ruined, but most of all: fear, desolation and despair for so many people.

The "Don Bosco Foundation" of Peru has launched a solidarity campaign "Give me a hand, Peru". In the midst of so much misery, especially in the North, many countries have offered humanitarian aid. The Salesians in various houses are collaborating collecting water, food, clothes and tents, because many people have been deprived of everything.

The Foundation moved to Piura, where the Salesians and the Daughters of Mary Help run large works at the service of youth. The aid operation started with the transport of materials and basic necessities. The same is being done in Chosica, which is about 40 km from Lima, and where the work of helping those in need is centralized in the parish of Don Bosco.

The educational infrastructure was affected. In Piura the rains have affected about 100 schools which were flooded and suffered damage to roofs and walls. So far it is impossible to resume lessons.

The emergency is due to a phenomenon known as the "Niño costero". Peru has not had anything like it since 1925.

In the midst of so much pain the Pope's words encourage Peruvians: "I want to assure my closeness to the dear people of Peru, hit hard by devastating floods. I pray for the victims and for those who are committed to providing assistance."

According to the weather reports, weeks of incessant rain are to be expected, where the rivers will flow unimpeded because there are no houses or fields, there is nothing in their path, since everything has already been taken away. All that remains is the misery and poverty of thousands of Peruvians who await help: "Give me a hand, Peru."