Kenya - Fire destroys the Kuwinda district of Nairobi, where the Salesians are working 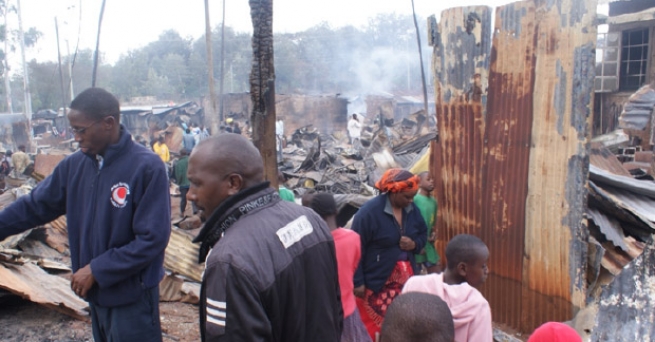 (ANS - Nairobi) – For over 30 years Salesian missionaries have been offering vocational training and human formation to the youth of Kenya. In Kuwinda district, in Kenya's capital, Nairobi, they run a parish and a primary school for children and adolescents. But last Saturday evening, the area was reduced to ashes by a raging fire that quickly spread through the houses built of wood. The problem is not only the physical destruction suffered, but the large number of children and families deprived of everything and in need of help.

Hundreds of people have lost everything and sadly there has also been one death, a woman with disabilities. All attempts to rescue her were in vain. The Salesians, as in many similar situations, began to respond to the emergency as soon as possible, to help dozens of children who lost their school and to assist their families so that they may have enough to live on.

First investigations indicate that the probable cause of the huge fire was a candle left burning. Then the fire quickly spread among the humble wooden houses and it was fed with the gas cylinders that many families kept in their homes, causing enormous damage and making it impossible to put out the fire.

The Divine Mercy Church, served by the Salesians, was also destroyed by the flames. The fire burnt everything, from the first stone to the aluminium foils in the roof. In addition, the primary school children who come from the slums could not return to school because their school uniforms and all the books were lost.

"During the night it was impossible to do anything to put out the fire," the Salesians say. The next morning the whole neighbourhood tried to give an immediate response, especially for the children. And the gestures of solidarity and aid came quickly. The Salesian Mission Office in Madrid - Misiones Salesianas - has also already promised to ensure that the Salesians can respond as soon as possible to the difficulties of thousands of people affected by the fire.