Tanzania – Rector Major to the youth: “you give me hope for the future” 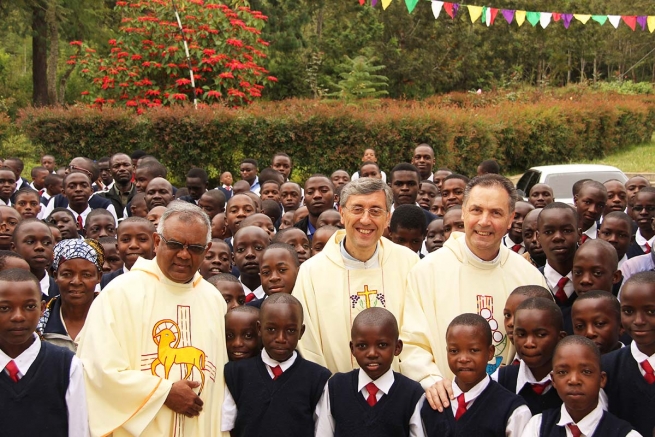 (ANS – Iringa) – After the Holy Mass at Don Bosco Mafinga Parish with the students of the seminary and the parishioners, on Thursday, April 20, the Rector Major and his team proceeded to Don Bosco Vocational Training Centre, Iringa. There he had a chance to meet with the youth and he told them, “you give me hope for the future”.

After lunch, the next leg of the journey began. That was to Shinyanga with a brief stopover in Dodoma, the political capital of Tanzania. At Dodoma airport some of the students of the Higher Secondary School had a chance to meet and chat with the tenth successor of Don Bosco while the plane re-fuelled. The rest of the students went to Didia to meet him.

Then began the journey to the final destination of the day, Don Bosco Secondary School Didia in Shinyanga. The welcome given and the love manifested really touched the Rector Major. There was a guard of honour by the scouts even though it was raining and there were cultural dances by the students of the school. The government of Tanzania was present in the person of the District Commissioner (DC). From there the convoy carrying “Don Bosco” drove to the school with a police escort.

The atmosphere could not contain the excitement of the students. Though it was dark the students, boys and girls, about 1,600 of them went hysterical as the Rector Major’s convoy drove in. Some people from the nearby village came to see what was happening. In the hall there were more cultural dances, speeches and songs. The outstanding event was the enthronement of the Rector Major as one of the elders of the Wasukuma tribe (the tribe of the area).

In his short talk the Superior of the Salesians, touched by the gesture of the students and the Salesians thanked all for the demonstration of their love for Don Bosco in the person of Fr Artime. Supper followed after a few more presentations. The visitors went to rest while the young people continued with the fun and entertainment.