Morocco - Salesians bring water to the desert: "It's probably the first time these children have ever played with water!"
Featured 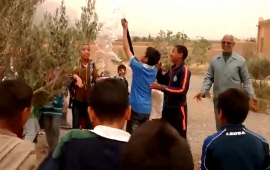 (ANS - Middle Atlas) - "It was an unforgettable experience. They were living in precarious conditions. But when you see that what you have designed and built really helps people, you feel great."  This was the testimony of Martín Mendizabal and Jon Vicente who carried out a project to bring water to people living in the desert.

Martín and Jon designed a project for the extraction of water through solar energy pumps. They designed the pumps during the first year of their course at the Mechatronics Integrated Department of the Don Bosco Professional Training Centre. Now their pumps are working in two villages of the Middle Atlas Mountains in Morocco.

Today they still remember the image of happy children laughing non-stop and splashing around in water coming out of a pipe: "It's probably the first time they have ever played with water," comments Jon Artola, the professor who accompanied the two students.

The idea for this solidarity project came from Madrid.  There they saw that in the region of Er Rachidia, Morocco, there is a great need to extract water.  Even though there are wells, the method used to obtain water is archaic - through a system of pulleys.

They decided to combine training and solidarity and so water pumps were designed for two Moroccan villages: Taz-Nat and Ait-Innou. Several companies took part in the project gratis.

The first goal was Taz-Nat, a village with 500 inhabitants, without electricity or running water. "We were impressed by their way of life. What you get in Spain in one minute, takes hours or even days in that village" commented the students. The installation of the second pump at Ait-Innou seemed a simple task, but in fact it proved more difficult.

Martín and Jon were very impressed with this experience. "People were very grateful. They are very poor, but they give us food in their homes and thanked us." They recall that "when we finished the installation it was night. The next day in front of the well we found a queue of women with buckets waiting for their turn to turn on the tap."

Finally, Martin said: "When we were offered the idea of ​​doing something for these people, I really liked it and decided to accept the project." Don Bosco not only brought water to the desert but changed the lives of many people.