Poland - Rector Major: "Thanks to you, I return happier for my Salesian vocation" 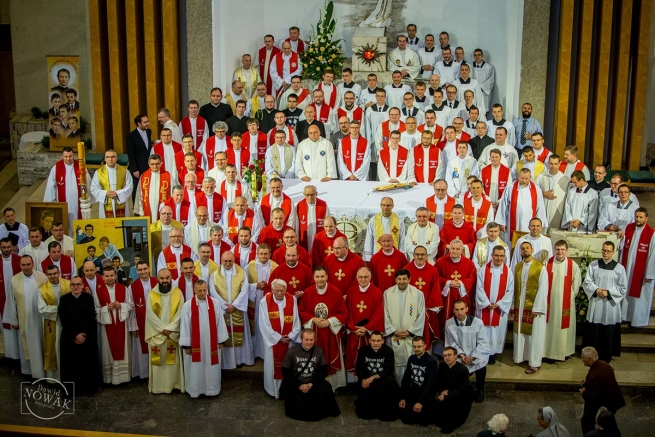 (ANS - Poznań) - On the weekend of 9-11 June, the trip of the Rector Major, Don Ángel Fernández Artime, to Poznań, in the Poland-Wrocław Province, took place on the occasion of the 75th anniversary of the martyrdom of the five Blessed oratorians. Accompanying the Rector Major were the Regional Councilor for Central and Northern Europe, Fr. Tadeusz Rozmus, and the Rector Major's Secretary, Fr Horacio López.

Before the Salesians and young people went to the Ławica Airport to welcome the Rector Major, at Fortress VII - the prison where the five were imprisoned, which today hosts the Martyr Museum – there was the opening of an exhibition dedicated to the five oratorian martyrs, presided by Archbishop Stanisław Gądecki of Poznań, together with Fr. Jarosław Pizoń, Provincial of Wrocław.

At the same time, numerous youth groups from various parts of Poland were gathering at the Salesian Institute in Poznań for a youth rally.

Saturday was a festive day for the entire Salesian Family: a film entititled "The 5 Blesseds of the Salesian Oratory" was screened for the first time; and the solemn Eucharist was celebrated. In the afternoon, Fr Á.F. Artime met with the families of the five Blesseds, and attended a youth concert.

In the evening there was still time for a special prayer at Fortress VII, and on this occasion the Rector Major offered his thoughts for the Salesian "Goodnight". He emphasized that the death of the five oratorian youths was not wanted by God, who is instead a God of life, but "by the structural sin" that marked that time; he indicated the five blesseds as models for research and closeness to the Lord for young people: "They lived these two years of suffering with great peace. The Lord's grace was always their strength. We must be convinced that we too can find God's presence in our lives."

On Sunday, celebration of the closing mass of this special triduum of celebrations took place in the same church of Mary Help of Christians that the five oratorian martyrs used to attend. "You young people are the ones who have the power to make us better and happier. Thanks to you, I am more enthusiastic and happier for my Salesian vocation," concluded Fr Á.F. Artime in the homily.

On ANSFlickr, there are numerous photos and videos of this trip.