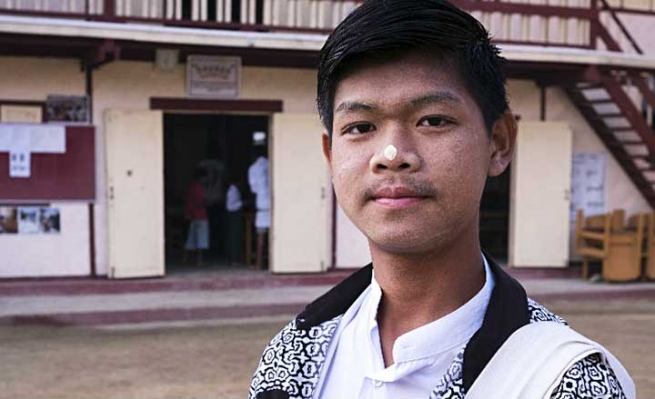 (ANS - Mandalay) - Maung Zaw Oo is a Burmese boy who has experienced abandonment, loneliness and life on the streets. But thanks to the Salesian Youth Center of Mandalay, he has begun a new life.

When Maung Zaw Oo was still a child his parents separated. At age 9, he was accompanied by his mother to live with family friends who owned a tea room in Mandalay. It was supposed to be a temporary solution, but then his mother disappeared, and he was alone with the new family. He stopped studying and started working as a helper in the tea room.

It wasn't so bad actually, but after about a year he decided to leave and he began to live on the streets: every day, he had to struggle just to survive, ate what little he found in the waste bins... until, one day, he regretted his choice. Providentially, he met someone who talked to him about the Salesian Youth Center. He went to the Center and liked it.

Maung Zaw Oo has been living at the Salesian center for several years now. He is no longer alone; indeed he has friends who are also from the streets. In the center he has acquired a healthy daily life and habits with time for education, rest, meditation, and prayer.

Every morning, after waking up, he tidies up, stores his few belongingsin a little green metal box; it's all there, in one place. He leads a simple life, but it makes him happy. He has a community that accompanies him and everything is well organized and structured. After the morning wake-up call, they all pray, have breakfast, wash their own dishes, and then each child prepares for the day.

Maung Zaw Oo is now back in school. Not having the necessary certificates, he could not enroll in the state schools, so he attends a Buddhist school near the Salesian center. He is in a class of 25 other students, but there are some classes with up to 100 students. Maung is studying hard, and he likes to study English, which he now speaks fluently. He has new friends, and a dream for the future: to become a tourist guide one day.