Egypt - Salesians needed more than ever among young Egyptians 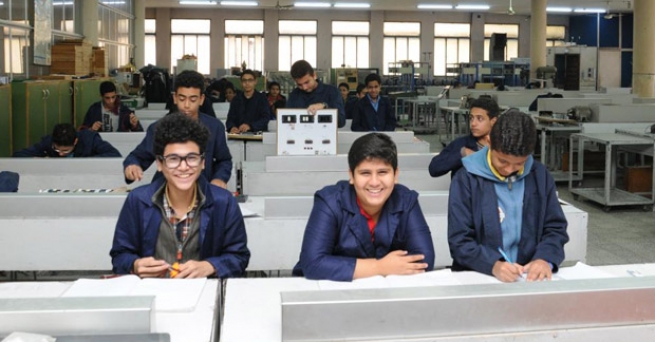 (ANS - Cairo) – The Salesian presence in Egypt is of great importance in the daily lives of thousands of young people in Egypt. Because of the political and social complexity of the country, Salesian work is more necessary than ever: for many children, the institutes of the Sons of Don Bosco in Cairo and in Alexandria represent, in fact, the only opportunity to obtain a dignified socio-economic condition.

Since its inception, the Salesian mission in Egypt has devoted itself to the development of the human and professional skills of young people, especially those with less resources and the economically marginalized. Equal access and quality of education are guaranteed to all, with a view to promoting employment opportunities for young people in technical trades.

Cairo and Alexandria represent the largest urban centers in the country, where 23.6% of the population is represented by young people under 30, half of whom live below the poverty line, and one third of them currently do not have work.

The number of young people and their families suffering from economic difficulties has increased considerably in recent years due to many factors, such as the so-called "Arab Spring" and the fall of the Egyptian national currency in 2016 following the decision to launch a new financial policy based on currency fluctuation. The number of young people leaving the country is increasing each year, a reflection of the lack of decent employment opportunities.

The Don Bosco Preventive System has been applied with particular attention to multicultural and multireligious factors that characterize the context of the Middle East. Salesian youth institutes and centers represent a safe and secure space. In addition to school and educational activities, the institutes offer a variety of sports and recreational activities to both Christian boys - an increasingly vulnerable minority and victim of recent terrorist attacks – as well as the Muslim boys, a majority.

In such contexts, there is no room for religious discrimination, and the Salesian Institutes focus on helping and promoting the human development of children and young people regardless of their convictions or family backgrounds.