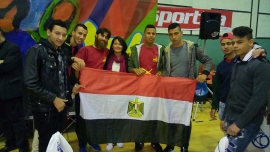 (ANS - Turin) - Ahmed comes from Egypt, is a Muslim and he arrived in Italy three years ago. The family did not want to let him go, for fear of losing him in the waves of the Mediterranean but, convinced by a friend, Ahmed decided to leave with the help of his father. Now he has started a new life in Turin, accompanied by the sons of Don Bosco. "The most beautiful and important lesson I learned is to live in peace with people of different countries and religions and the recent visit of the Pope to Cairo is a beautiful demonstration of how we can be brothers," says Ahmed.

The seven days spent in the waves of the Mediterranean were tough: a terrible experience, with the fear of food and water becoming increasingly scarce.

He landed in Sicily, where he spent four months in a center together with another 100 children, without being able to go to school and without documents. Thanks to the money sent by some relatives, he fled and reached Turin. His desire was to work, but being a minor he couldn't, and he wanted to have opportunities other than the occupations of his family who were employed in pizzerias, selling kebabs or working as masons.

After a year, he went to the office for foreign minors, and was entrusted to a community outside Turin, where, however, he was denied the opportunity to go to school and learn Italian well.

On going away, after a month with relatives, he finally met the Salesians: he was welcomed at the San Luigi Oratory and found an open community where he could live with other boys from different backgrounds and religions. He was taught Italian and, after obtaining his junior high school diploma, he attended a professional welder course and worked as an intern at a factory.

The Salesians did not leave him alone on his reaching adulthood: now he deals with Egyptian minors at  San Luigi, trying to be a big brother to them. "I was just like them and I can understand them, so I want to help them," he says with a smile. He is also looking for work, hoping to put into practise the skills he learned, and to stay in Italy.

This is the story of Ahmed, who after a long period of darkness, has found hope thanks to the Salesians and he has now put himself to the service of helping other Egyptian boys like himself so they might, too, design their own future.