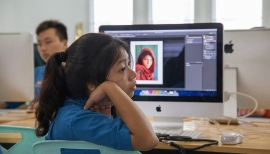 (ANS - Bangkok) - Thailand and Vietnam: two neighboring but very different countries, and in which the Salesians have had a very different path; in common, however, there is the service of the Sons of Don Bosco to young people, which has continued for decades, with great attention to professional training.

Thai students arriving in the two Salesian Professional Training Centers (CFP) are students who've performed poorly, come from school failures, with relational problems or learning difficulties, but they graduate from the Salesian training courses with skills that are immediately marketable in the workplace.

In both CFPs there are about 1000 students, who are formed on the latest technological innovations; then, thanks to the country's great industrial productivity, the skilled manpower produced in large quantities by the Salesians is easily absorbed and hired.

"In developing countries, the school is usually the first educational instrument that the Salesians of Don Bosco get going, but it was not possible after 1975," Mr Pettenon explained. “That is why the Salesians have developed CFPs.”

In the south of the country, where the percentage of Catholics is larger, and the Salesians are more present, there are 6 Salesian CFPs that educate and transform those who are unhappy, demotivated, unable to keep up with the educational goals imposed by the school system. Other significant educational works are student boarding houses for children from the countryside who attend state schools; a center for diversely-abled children and teenagers; parishes and oratories; and in Saigon, there is also a school-shop featuring a refined European cuisine restaurant managed by the students of the school's vocational training program.

Thailand and Vietnam: hard-working and enterprising lands, where being Catholic means being a minority, and to be Don Bosco's Past Pupils is a chance for one's own future.